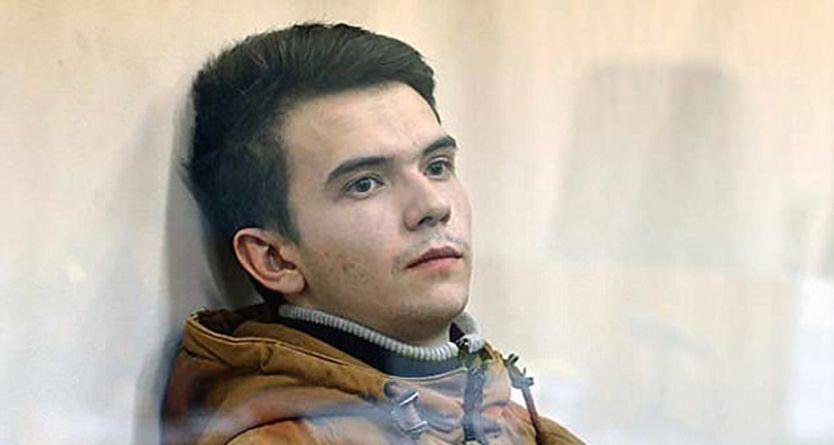 The man behind a sick ‘suicide game’ aimed at children has been inundated with love letters from teenage girls addressed to him at a Russian jail where he is in custody.

Philipp Budeikin is being held on charges of inciting at least 16 schoolgirls to kill themselves by taking part in his social media craze called Blue Whale – which police fear is spreading to Britain.

The Russian 21-year-old – who has now confessed to the crimes – says he thinks of his victims as ‘biological waste’ and told police that they were ‘happy to die’ and he was ‘cleansing society’.

The lethal game called Blue Whale involves brainwashing vulnerable teenagers over a period of 50 days, urging them to complete tasks from watching horror movies to waking at strange hours, and self harming.

Eventually exhausted and confused, they are told to commit suicide, and it is feared in Russia that dozens have done so at the bidding of Budeikin or other ‘mentors’.

In Britain, a school in Essex had made parents aware of the game following talks with police.

Police forces in Cambridgeshire and Hertfordshire have urged parents to monitor their child’s social media.

Russian prison authorities say they have received dozens of love letters from teenage girls for the suspect at the notorious Kresty jail in St Petersburg, which they passed on to him since he was held in November pending a trial.

Worryingly, by law they say they cannot ban Budeikin – also known by the name Philipp Lis (meaning Fox) – from receiving and replying to teenage girls who supply their addresses.

Psychologist Veronika Matyushina said: ‘Most likely, those young girls who fell in love with Philip Lis were not receiving enough love and attention from their parents, and this handsome young man from the Internet provided certain support for them and gave that attention they needed.

‘This is where romantic feelings were born.’

Some estimates say hundreds of Russian teenagers – the vast majority female – have died after becoming fixated with these online death groups.

A disturbing video purports to show one Russian girl jumping to her death.

Anton Breido, a senior official from the Investigative Committee, seen as an equivalent of the FBI, warned: ‘Budeikin very clearly knew what he had to do to get the result (he wanted).

‘He started in 2013 and ever since he has polished his tactics and corrected his mistakes. Philipp and his aides at first attracted children into VK (social media) groups by using mega-scary videos.

‘Their task was to attract as many children as possible, then figure out those who would be the most affected by psychological manipulation.

‘”Biological waste” is how death group administrators referred to children they pushed to commit suicide.’

He explained how the deadly process worked.

‘They gathered the children, then offered simple tasks which for some children were too boring or weird to complete.

‘These ones were clearly too strong to be manipulated.

‘Those who stayed were given much stronger tasks like cutting their veins, to balance on a rooftop, to kill an animal and post a video or pictures to prove it.

‘Most children left at this stage.

‘A small group that was left who obediently went through all the tasks, with teenagers being physiologically ready to follow whatever the administrators told them, no matter how strange or scary the tasks.

‘They felt their position in the group was so precious that did literally everything to stay in.

‘One of the troubles for us was that 15 children who committed suicide at administrator’s orders were told to delete all correspondence in their social media accounts, which they all did.’

However, one unidentified girl went through to the final stage of the game before giving up, and she provided state investigators with crucial evidence.

He revealed how easy it was to succumb to Budeikin’s trap.

‘Like all other teenagers, she spent a lot of time on social networks. She saw a link to click a scary picture, then another, and finally reached one of the groups promoting suicide organised by Philipp.

‘There were thousands of such groups so it was really easy to join one of them, she said.

‘She was given tasks which she completed easily, and finally, she was selected to join a small group of teenagers where she was noticed by Philipp.

‘The girl then received an invitation to join a closed group, a night time chat when you had to be up 04.20 every night, night after night, with ever accumulating tiredness and decreased the ability to make clear decisions, in fact, any decisions at all.’

She said: ‘It was middle of a night, my alarm rang, I woke up and got straight to my phone.

‘I had to watch videos with pictures flicking every two seconds of teenagers jumping off roofs, close-ups of bodies, bloodied mouths, pools of blood under bodies.

‘It was accompanied by very unpleasant, haunting music with screams of animals and pets, and cries like children were being tortured.

‘I felt so awful after watching them I wanted to do something physical to either myself or somebody, to kill, to destroy.’

If she wrote saying she wanted to leave, she received abuse and threats from the administrator.

‘He shamed me for being weak, and not feeling bad enough about my life.

‘I had to watch until the administrator commanded me to stop and ordered me to erase everything.’

Breido said: ‘Even an adult would have felt shocked in this situation.

‘Our girl told us about another video, with very gloomy music, a black screen and then a flash of red, and a teenager that stood on railway track being hit by a train – with music and screams and shouts that tear your heart to pieces.

‘I felt bad even listening to her. She said that the videos strengthened her idea about suicide.

‘Philipp told her that life was awful and that it would never get better, that she was not interesting, how her parents didn’t need her, that they would never understand her.

‘Do something beautiful at least once in your life, he was saying, it is so good to die young. He was saying that she was special, a rare “selected one” who could understand the truth.

‘She felt that she was scared to make the final step, and Philipp immediately offered an alternative.

‘You don’t have to jump off a roof or go under the train, he said. It’s okay to take pills, it’s painless.

‘We’ll help you then’, he answered. By a complete coincidence and luck, she was noticed in time to be rescued.

‘She went through a long psychological rehabilitation and is much better now, she speaks about her experience very openly.’

In a chilling interview in St Petersburg, Budeikin was asked if he really pushed teenagers to their deaths.

‘Yes,’ he said. ‘I truly was doing that. Don’t worry, you’ll understand everything. Everyone will understand.

‘They were dying happy. I was giving them what they didn’t have in real life: warmth, understanding, connections.’

He denied reports that there had been as many as 130 teenagers.

‘There were 17 of them,’ he said but also claimed another 28 were ‘ready’ to take their lives.

‘There were also those with whom I was simply communicating, who committed suicide later but without my direct influence.

‘There are people – and there is a biological waste. Those who do not represent any value for society. Who cause or will cause only harm to society.

‘I was cleaning our society of such people. It started in 2013 when I created F57 [online] community. I’d been thinking through this idea for 5 years. It was necessary to distinguish normal [people] from biological rubbish.’

He admitted to setting up social media with ‘depressive content that puts an individual in the right mood’ before children are admitted to ‘private communities’ online ‘where everything is happening’.

‘The game begins. You need to do tasks, tell about yourself, communicate,’ he said.

‘During this communication, it gets clear who’s who. Then I skype with the person, put her in trance and learn some things from their life after which I make my decision.

‘At some point it is necessary to push the teenager not to sleep at night. [In this way their] psyche becomes more susceptible to influence. Unexpectedly, the idea became some sort of trend. There were a lot of imitators, which annoys me.’

True or not, the suicides are continuing to be promoted by these death groups after Budeikin’s detention.

Investigator Breido said Budeikin had been friendless at school, and that his mother had little time for him because she had a long commute to and from work.

‘He was in conflict with his peers,’ he said. He didn’t show do well at studies. After classes, he spent all hours online.

‘He barely saw his mother. She left home at 5 am and came back late, fed herself and her son and that was it. He didn’t even go out for walks, she said.

‘So a person who never built any connection with anyone suddenly felt that he was in charge of other people’s wills and lives.

‘When he pushed children to commit suicide, he told them not to be scared.

He told them: ‘I’ll gather you all together in a squad up in the sky.’

Breido said: ‘When he was detained, he was still in ‘God’ mode….he felt he was untouchable.’

The investigator called for tougher laws to crack down on people who promote suicide among the young.

Two school girls Yulia Konstantinova, 15, and Veronika Volkova, 16, fell to their deaths in February after it is believed they were involved in Blue Whale.

Angelina Davydova, aged only 12, fell to her death from the 14th floor of a block in central Russia on Christmas Day 2015 after logging onto a user group called ‘Wake Me Up at 4.20’ which had more than a quarter of a million subscribers before it was blocked.

In the weeks before she died, the girl became convinced she was overweight and ate only light salads. She died 50 days after joining the group.

In December, Vilena Piven, 15, jumped from the 13th floor in Mariupol, Ukraine and died on the spot.

Her classmates said that she was shy and had been seen as a school with cuts on her arms.

She posted the view from the top floor of the building on her social network page and wrote: ‘The quest is over. There’s just one step to be made.’

Later she wrote: ‘I did not think that it would be so scary to jump. Just one step forward and everything is done. But this very step is so difficult to make.’

Before the jump, she wrote: ‘I’m scared, I’m afraid.’ Despite this, she jumped.

Rosstat national statistics agency published data that 22,839 people committed suicide in 2016, down from 24,982 in 2015, without differentiating age groups.

The latest figure has more than halved from 2005 when there were 45,800 suicides.

For confidential support call the Samaritans on 116 123, or visit a local Samaritans branch – see www.samaritans.org for details.