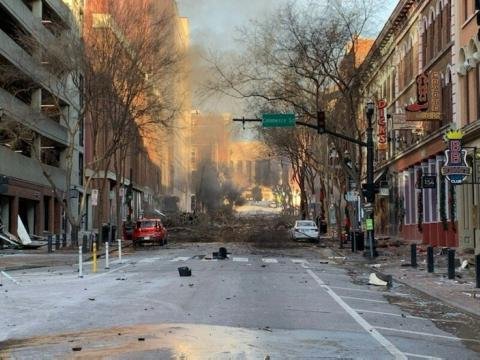 A huge explosion tore through a section of downtown Nashville early Friday, after police responding to reports of gunfire discovered a parked motorhome playing a recorded bomb warning.

The blast shattered windows and ripped apart trees but appeared calculated to spare lives, injuring just three people as it detonated at 6:30am (1130 GMT) in a section of the southern US city that was largely deserted due the early hour and the Christmas Day holiday.

The blast left as many as 20 buildings including store fronts badly damaged and the road surface charred — scattering glass, tree branches and bricks in an area filled with businesses, restaurants and bars.

In a dramatic sequence of events that shattered the Christmas morning calm, police responded to calls that gunshots had been fired and noticed the vehicle as they arrived on the scene.

A recorded message playing from the motorhome warned that a bomb would detonate within 15 minutes — enough time for a bomb squad to clear the area before the explosion, police chief John Drake and spokesman Don Aaron told reporters.


Witnesses told the Tennessean newspaper the warning, spoken in a woman’s voice, counted down to the blast.

“Evacuate now. There is a bomb. A bomb is in this vehicle and will explode,” one recalled the chilling recording saying.

Pictures shared on social media from the immediate aftermath showed thick plumes of black smoke rising from the burning RV and store fronts that had been torn apart.


The Tennesean reported that officers were conducting door-to-door checks.

Map of the US state of Tennessee locating Nashville, hit by an explosion Friday.
AFP / STAFF


A dog walker had been heading towards the vehicle just before the blast, the paper said, but police sent him back in the other direction, potentially saving him from serious injury or death.

The blast knocked an officer to the ground, the paper said, and gave another officer hearing loss.

President Donald Trump was briefed on the incident, which is being investigated by the FBI and the US Bureau of Alcohol, Tobacco, Firearms and Explosives.

Agents offered no possible motive immediately and made no link to any domestic terrorism plot.

Neither was it immediately clear if anyone was in the RV when it exploded.

“This appears to have been an intentional act. Law enforcement is closing downtown streets as investigation continues,” the Metro Nashville Police Department tweeted.

Firefighters said at least three people were taken to the hospital with minor injuries, according to local media.

The blast was large enough to be felt several kilometers away.

The damage was “limited but it is dramatic,” Nashville Mayor John Cooper said, adding that the city was “lucky” the blast had occurred on Christmas when few people were downtown.

“It’s unfortunate but any other morning I think it would have been a much worse story.”

Police said several people had been moved to a local station for questioning, although no arrests or details of suspects were announced.

US Senator Marsha Blackburn of Tennessee led messages of concern from multiple public figures, saying she was “praying for all those involved” and thanking the “brave first responders for keeping us safe.”