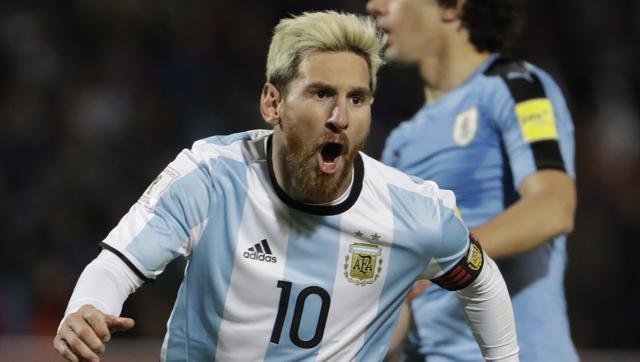 Lionel Messi marked his return with the only goal of the match to give 10-man Argentina a 1-0 win over arch-rivals Uruguay on Thursday that lifted them to the top of the South American qualifying group for the 2018 World Cup finals in Russia.

Messi scored a record 56th Argentina goal in a solo move with a shot from outside the box that took a deflection on Jose Maria Gimenez and wrongfooted goalkeeper Fernando Muslera shortly before halftime.

Argentina then had young forward Paulo Dybala, who had almost put his side ahead in the 31st minute with a shot that hit the post, sent off on the stroke of halftime for a second booking.

Uruguay, who had spent virtually the entire first half defending in their own half, surged forward after Messi’s goal and Javier Mascherano blocked a Luis Suarez effort.

With an extra man and looking for at least an equaliser, Uruguay were the team that did most of the attacking in the second half but hardly troubled goalkeeper Sergio Romero.

Mascherano was superb in defence and, playing like two men, also found the energy to launch counter-attacks.

Messi had said in June he was quitting international soccer after the disappointment of losing the Copa America final on penalties to Chile but has reversed that decision.

Argentina lead the 10-nation group with 14 points from seven matches, one more point than Uruguay, Colombia and Ecuador.

In earlier matches, Colombia beat bottom team Venezuela 2-0 while Gabriel Jesus scored twice as Brazil won 3-0 away to Ecuador in Quito and climbed into fifth place with 12 points.