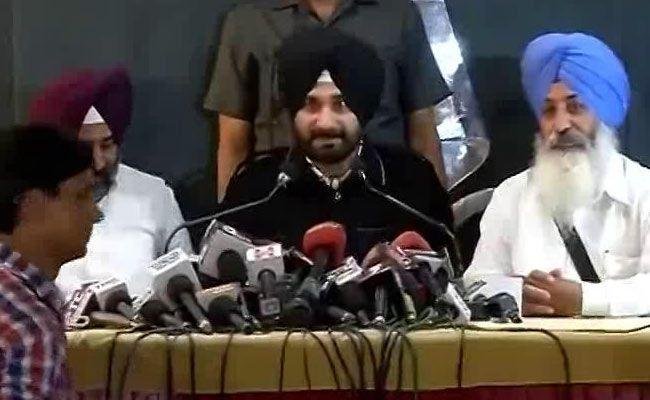 Navjot Singh Sidhu, dressed in black and white, spoke mostly in Punjabi as he launched a new political party, the Awaaz-e-Punjab, and broke his long silence on his aborted talks to join Arvind Kejriwal’s Aam Aadmi Party.

Mr Kejriwal wants “only yes men,” Mr Sidhu, alleged, revealing that the Delhi chief minister had asked him not to contest the Punjab elections early next year, offering to make his wife a minister instead if AAP won.

“I said Sat Sri Akal (thank you very much),” said Mr Sidhu, 52, who declined not just an offer to join AAP, but also one from the Congress’s Punjab chief Amarinder Singh, on his way to launching his own party.

He gets to be presumptive chief minister, which was not on offer in the other deals.

Mr Sidhu has only five months to get his party election-ready and political observers say that it might not be enough time to make a serious impact. But, they say, he could cut into the votes of the Aam Aadmi Party, with both making a debut and pitching a change in Punjab, ruled so far either by the Congress or the Akali Dal.

There is buzz that Mr Sidhu could draw the support of AAP’s sacked Punjab chief Sucha Singh Chhotepur, whose supporters in the party have rebelled in protest against his removal over allegations of corruption in selecting election candidates.

The former cricketer said today that “the resurrection and revival of Punjab is the aim of Awaaz-e-Punjab,” peppering his announcement with what have come to be called “Sidhuisms” – catchy one-liners.

“Our slogan is Punjab will win, Punjabiyat will win and Punjabis will win,” Mr Sidhu said.

Navjot Sidhu resigned as a nominated member of the Rajya Sabha and walked out of the BJP, his party of 12 years, in July this year and for weeks was reported to be in talks to join AAP. When an August 15 date of joining passed, it became clear that negotiations had faltered.

His wife, Navjot Kaur Sidhu, who is a lawmaker in Punjab, is expected to quit the BJP soon.