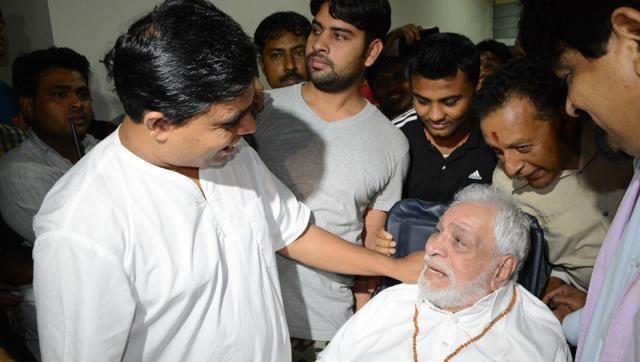 Bollywood actor and writer Kader Khan was admitted to Ramdev’s Patanjali Yogpeeth in Haridwar on Wednesday. The 79-year-old ailing actor, who is suffering from several ailments including diabetes, will stay at Patanjali for three weeks, said Ramdev’s second-in-command Acharya Balkrishna.

The actor arrived at Dehradun Jollygrant airport, along with his son Shahnawaz, on Wednesday and later headed to Haridwar. The actor has stayed away from limelight for almost a decade and is set for a comeback to Bollywood with Ho Gaya Dimag Ka Dahi that hits theatres on October 16.

The septuagenarian actor now has been on the wheelchair for long due to pain in the joints. Last year, he paid a visit to Mecca for Haj with his two sons. “I met Kader Khanji in Mumbai sometime back for his health check-up. I advised him to visit Patanjali for further treatment,” Balkrishna said. During his stay, Khan will undergo several tests.

Kader Khan and Govinda’s pair was a success formula for many film producers during 90’s and early 2000’s. The comic chemistry of the two actors resulted in hit films like Dulhe Raja, Sajan Chale Sasural, Dariya Dil, Raja Babu, Aankhen, Coolie No 1 and Hero No 1.