Jat protests, JNU to be ammo against BJP in Budget session 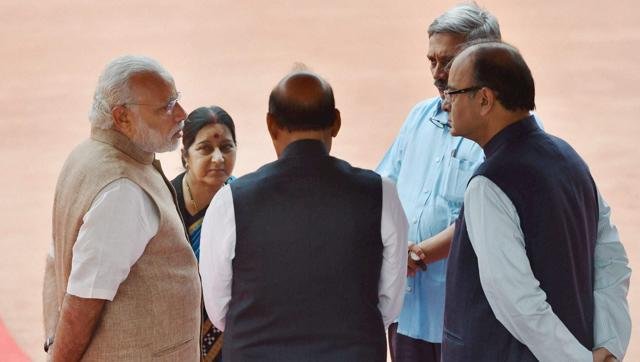 The Jat agitation for reservation and the Jawaharlal Nehru University row over ‘nationalism’ has given the Opposition’s fresh ammo against the government in the Parliament’s Budget session that starts from Tuesday.

At the all-party meeting on Monday convened by parliamentary affairs minister Venkaiah Naidu, the Opposition dubbed the BJP-RSS stand on the JNU row as “fascist nationalism”, drawing a parallel between the Nazi regime’s false propaganda with the “doctored evidence” against students of the capital’s premier university.

The Opposition also questioned why NDA-ruled states — Haryana, Gujarat and Andhra Pradesh — had fallen victim to simmering quota agitation, setting the stage for another confrontation with the Centre in the budget session. While Jats are demanding inclusion in the state’s OBC quota, a section of the Patidars in Gujarat is up in arms for reservation. In Andhra Pradesh, the Kapu community is fighting for Backward Caste status.

“There is a chilling similarity between what is happening here and what happened in Hitler’s Germany. The Prime Minister’s event management has not solved any problem. This is fascist nationalism. Who is responsible for distortion of facts and the manufactured row in JNU?” CPI(M) general secretary Sitaram Yechury, who plays a key role in the Opposition’s floor strategy, said. The Opposition also plans to take up the issue of Dalit scholar Rohith Vemula’s suicide alleged to have been caused by government pressure.

The government showed no sign of buckling under Opposition pressure: “We want a detailed discussion on JNU. People should know what really happened there, the cause and the consequences of the act,” Naidu said.

While all opposition parties agreed to cooperate with the government to run Parliament smoothly, after successive washouts of sessions last year, they also pressed for an early discussion on the raging issues. Caught between a furious Opposition and the urgency to pass key bills, government managers maintained they, too, were “much concerned” by recent incidents in different universities and agreed to discuss the issue at length.

Congress leader Ghulam Nabi Azad said only bills on which there was consensus should be taken up. He specifically asked the government not to bring the GST and other contentious bills in the first half of the session. Yechury demanded an all-party meeting on the GST bill but Naidu refused. “Nothing comes out of an all-party meeting,” he said.