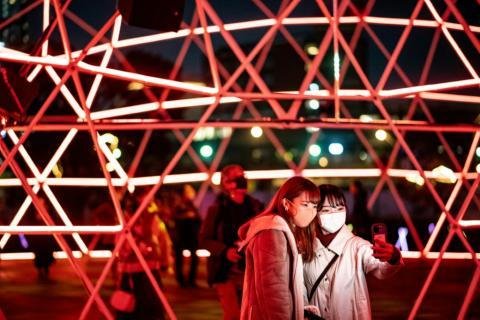 Japan is “extremely behind” in promoting gender equality its government said Friday, as it delayed an almost two decades-old target to have at least 30 percent of leadership positions occupied by women by the end of 2020.

Prime Minister Yoshihide Suga’s government approved a new five-year plan on gender equality, which says it will make efforts to meet the 30-percent target “at the earliest possible time” during the next decade.

While Japan ranks highly on a range of international indicators, it persistently trails on promoting gender equality, ranking 121 out of 153 nations surveyed in the 2020 global gender gap report of the World Economic Forum.

Just 14.8 percent of leadership positions in politics and business in Japan are occupied by women, “lagging extremely behind internationally,” the Cabinet Office said in the new five-year plan.

The new plan replaces the government’s last five-year plan, which included the 2020 target.

But the 30-percent target was originally set in 2003 by the cabinet of then-Prime Minister Junichiro Koizumi, who adopted the ambitious goal in a bid to force the nation’s male-dominated bureaucracy and Japan Inc businesses to accept diversity.

Former prime minister Shinzo Abe, who stepped down earlier this year, also repeatedly pledged to meet the same target, and made “womenomics” initiatives to include more women in the work force a key plank of his economic policy.

The Cabinet Office blamed social acceptance of traditional gender roles for the slow progress, saying the government would “make efforts so that women will occupy around 30 percent of leadership positions in the early part of the 2020s.”


In the political sphere, women are having to balance political activities and domestic tasks and they face various harassments based on their gender, it said.

And businesses have not been enthusiastic about promoting women, it added.

“Overall, society as a whole still leans toward stereotypical gender roles and has unconscious bias,” it said.

The new five-year plan had been expected to include mention of a growing social acceptance of allowing women to keep their maiden names after marriage.

But while polling shows public support for changing the law, the new five-year plan stopped short of backing the move, with conservative lawmakers in the ruling Liberal Democratic Party pushing to strike down the idea.

Instead, the plan refers to the issue as a matter for “further discussions.”