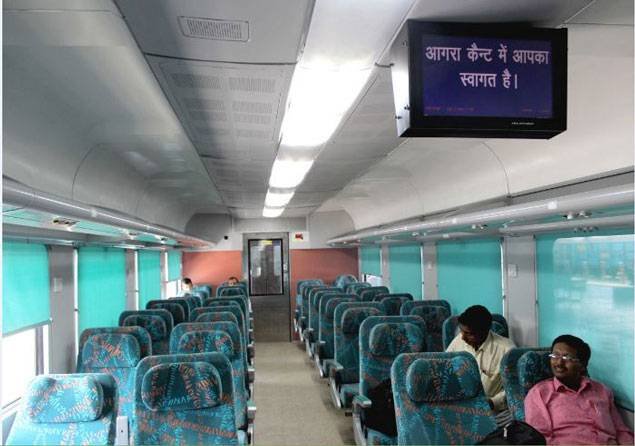 AGRA: Gatiman Express, the country’s fastest train, will start plying between Agra and Delhi from April 5. The state-of-the-art train will take one hour and forty minutes to complete the journey. Ironically, on the same route runs a passenger train which takes around eight hours to cover the 195-km distance.

On the inaugural day, the train will start its journey at 10am and reach Agra Cantt station at 11.40am. The Delhi-Agra Gatiman Express, the first train in India to run at a speed of 160 kmph, is expected to cover the 200-km distance in 100 minutes and will have train hostess.

The fare for chair car in fully air-conditioned Gatiman Express has been fixed at Rs 690, while a passenger will be required to spend Rs 1,365 for travelling Executive Class. In Delhi-Agra Shatabadi Express, the chair car fare is Rs 540 and Rs 1,040 for Executive Class.

On the other hand, there is New Delhi-Agra Cantt passenger train, which takes seven hours and 34 minutes to cover 195 km at a meager speed of 25 kmph. However, it never reaches the destination on time and take one-two hours extra. The fare is kept at Rs 45 and it has 27 halts in comparison of not a single stoppage between Agra and Delhi in Gatiman express.

Additional divisional railway manager Sheelendra Pratap Singh said, “It is not that it runs on a slower engine. Its maximum speed is 110kmph. The train since its inception has been running on this decided schedule and there is no plan to change it. It takes so much time because it stops at each and every station. Moreover, it is stalled for other premium train to give passage.”