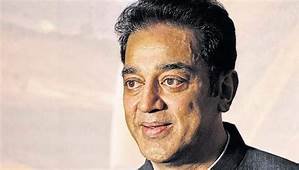 Makkal Needhi Maiam (MNM) president Kamal Haasan on Sunday called Gandhiji’s assassin Nathuram Godse a Hindu terrorist, setting off a storm of protests from the Sangh Parivar, with BJP petitioning EC to ban him from campaigning further and derecognise his party.

BJP’s allies, including Shiv Sena and AIADMK, too condemned the actor’s remarks. However, Congress’s Tamil Nadu unit and Dravidar Kazhagam (DK) backed him. “Independent India’s first terrorist was a Hindu.

His name was Nathuram Godse,” Kamal said at a rally at Pallapatti, which has a sizeable presence of Muslims. Pallapatti falls in the Aravakurichi assembly segment where bypoll will be held on May 19. “I consider myself the grandson of Mahatma Gandhi and have come to question that killing,” he said. “India’s Tricolour should be preserved in its originality. There is an attempt to make one colour dominate the rest and you know what colour I am referring to.

We need to drive that group away from power,”he said. Union minister Nirmala Sitharaman said the actor was following Congress and Communists in showing Hindus in poor light.

“It proves that he does not understand the difference between an assassin and a terrorist. He is in a hurry to prove that he follows the same line of appeasing minorities for the sake of his newly launched venture,” Sitharaman said.

AIADMK said extremism has no religion, neither Hindu nor Muslim nor Christian. Shiv Sena’s Sanjay Raut said, “Hindus will not tolerate it when their religion is linked with terrorism. There is no difference between Kamal Haasan and Digvijaya Singh.” TNCC president K S Alagiri said he agreed with Kamal’s remarks “not just 100%, but 1,000%”. “There is nothing wrong in what Kamal said. Godse was trained by RSS. They are the first and the last (for terrorism),” said DK leader K Veeramani.