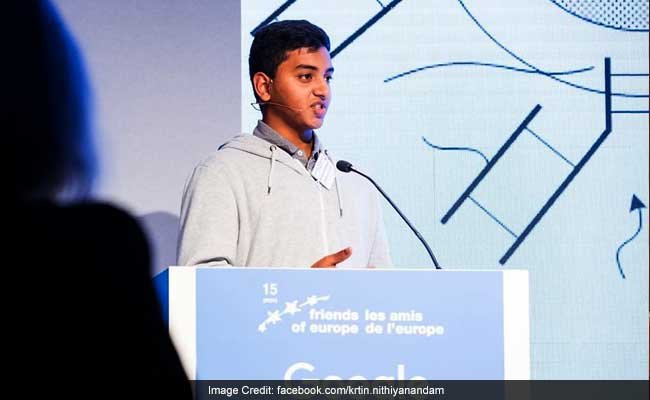 LONDON:  A 16-year-old Indian-origin boy in the UK has claimed to have found a treatment for the most deadly form of breast cancer which is unresponsive to drugs.

Krtin Nithiyanandam, who moved to the UK from India with his parents, hopes he has found a way to turn so-called triple negative breast cancer into a kind which responds to drugs.

Many breast cancers are driven by oestrogen, progesterone or growth chemicals so drugs that can block those fuels, such as tamoxifen, make effective treatments.

However, triple negative breast cancer does not have receptors and it can only be treated with a combination of surgery, radiation and chemotherapy which lowers the chance of survival. “I’ve been basically trying to work out a way to change difficult-to-treat cancers into something that responds well to treatment. Most cancers have receptors on their surface which bind to drugs like Tamoxifen but triple negative don’t have receptors so the drugs don’t work,” Krtin was quoted as saying by The Sunday Telegraph.

“I have found a way to silence the genes that produce ID4 which turns cancer back into a less dangerous state,” Krtin added.

Some women with triple negative cancer respond very well to treatment while others quickly decline.

The problem lies in whether the cancer cells are “differentiated” or not.

Differentiated means they look more like healthy cells and they tend to grow and multiply quite slowly, and are less aggressive.

However, when cancer cells are “undifferentiated” they get stuck in a dangerous primitive form, never turning into recognisable breast tissue, and spreading quickly, leading to high grade tumours.

He has also discovered that upping the activity of a tumour suppressor gene called PTEN allows chemotherapy to work more effectively, so the dual treatment could prove far more effective than traditional drugs.

The therapy idea saw him shortlisted for the final of the UK-based young scientists programme titled The Big Bang Fair.

His efforts had hit the headlines last year when he won the Google Science Fair for creating a test which helps pick up the early signs of Alzheimer’s disease and potentially stop it spreading further.