Indian media not allowed to cover my speech in Pakistan: Rajnath 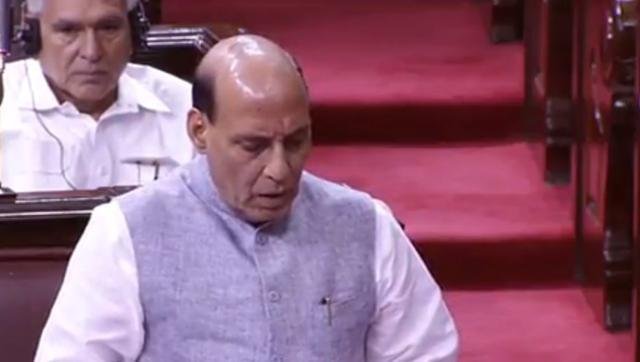 Home minister Rajnath Singh confirmed on Friday that Indian media was not allowed to cover his speech at a Saarc meeting in Islamabad.

“Indian DD (Doordarshan), PTI and ANI (news agencies) reporters were not allowed to cover my speech,” said Singh in the Rajya Sabha after MPs asked him if there was a deliberate media blackout.

“I am hesitant to say if they (Pakistanti authorities) had behaved as per the norms and protocol,” he said. Singh’s statement contradicts what the government had said on Thursday.

“I do not want to comment if Pakistan was right or wrong in not allowing coverage. I did not register any protest there. I have to ask the foreign ministry about past precedence of such meetings,” Rajnath said.

The government had played down the controversy over Pakistan’s state-run news channel PTV “not airing” Singh’s speech saying only host country minister’s remarks are shown on live TV.

Rajnath also spoke about why he skipped a lunch hosted by the Pakistan government. “I do want to say that the Pakistan home minister invited me for lunch but then he went away in a car. I also did what was necessary to maintain the prestige of India. I don’t have any grudge. I didn’t go there for lunch,” he said amid appreciation from the treasury benches.

“Our Prime Minister Atal Behari Vajpayee had famously said that friends can change but neighbours can’t change. Our former PM Dr. Manmohan Singh had expressed solidarity and said Pakistan is also a victim of terror. But after all these, they (Pakistani establishment) don’t consider itself as our neighbours,” Singh said.

The home minister said that in Pakistan he sought the “strongest” action against countries that back terrorism and pilloried those who eulogise terrorists.

“There should be strongest action against terrorism. The entire world is worried about this extreme threat,” he said in Rajya Sabha while addressing the House about his speech at a meeting of Saarc home ministers in Islamabad.

“I urged Saarc members that terrorists should not be glorified or patronised,” he said.

Singh, in Islamabad, did not name any countries or individuals in his speech in Islamabad but there was little doubt he was referring to Pakistan.

The remarks were an apparent reference to the stance adopted by Pakistan on slain Hizbul Mujahideen commander Burhan Wani and the subsequent unrest in Kashmir that left about 50 people dead last month. Islamabad angered New Delhi by referring to Wani as a “Kashmiri leader” and a “martyr” besides describing his death as an “extrajudicial killing”.

“If we are to rid ourselves of terrorism, we will have to genuinely believe that attempts to distinguish between ‘good’ and ‘bad’ terrorists are misleading, and thus, no type of terrorism or support to it can be justified on any grounds whatsoever,” Singh said in his speech.

However, the Congress held the government responsible for the “insult” to Singh. “Such an insult had never been heaped on an Indian home minister in any bilateral or multilateral fora. It is a result of the flip-flops, U-turns and zigzags in India’s Pakistan policy that have never been seen in the past 70 years,” party spokesman Abhishek Manu Singhvi said.

He said the Congress was “angry and saddened” by the manner in which Singh was treated.

Bahujan Samaj Party chief Mayawati asked if the government would now reconsider its Pakistan policy while the Samajwadi Party and RJD favoured a strong message to Pakistan.