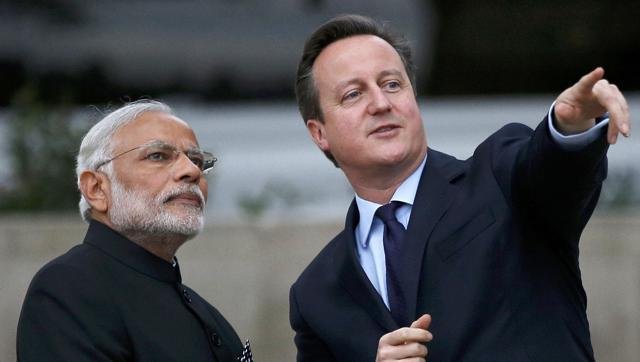 A series of private sector deals amounting to 9 billion pounds, including a £1.3 billion pound investment by Vodafone, were signed between India and Britain on the first day of Prime Minister Narendra Modi’s visit to the UK on Thursday.

“The first agreement I can announce is Vodafone, which has announced further investments in India to a total of 1.3 billion pounds,” Maude said. He said the investment covered network expansion and upgrades, and new technology and data centres.

In his speech to the businessmen, PM Modi spoke about the work done in India to make the country more trade-friendly. He also pitched his ‘Make in India’ initiative to the gathering.

Modi and Cameron welcomed a package to promote clean energy worth 3.2 billion pounds of commercial agreements, joint research programmes and initiatives to share technical, scientific, and financial and policy expertise.

Here are excerpts of the details of the six deals between India and the UK:

Merlin Entertainments is to open its first entertainment attraction in India. The first Madame Tussauds on the sub-continent will open in New Delhi in 2017. The company will invest up to £50 million over 10 years with a view to opening more of the company’s global brands in India in the coming years. The brands include LEGOLAND, Discovery Centre and Sealife Aquarium.

TVS is opening a £20 million advanced logistics facility in Barnsley which is expected to create 100 new jobs, and may grow to 500 across the TVS Group over 5 years. As part of Team LEIDOS, the company is integral to delivering £500 million worth of procurement savings to MoD over 13 years.

HDFC has announced the proposal to issue rupee denominated bonds overseas up to $750 million (£490 million) under the RBI guidelines, in one or more tranches. HDFC intends to list the initial issue of bonds for trading on the London Stock Exchange.

Lightsource Renewable Energy Holdings has announced a £2 billion investment in India. They will design, install and manage around three gigawatts of solar power infrastructure in India over the next five years. This investment is expected to create 300 jobs and generate £42 million of revenue in the UK.

Vodafone has announced further investments in India amounting to £1.3 billion in total. These include: £800 million to upgrade and expand its country-wide network coverage; £300 million in its high-end technology centres in Pune and Ahmedabad. The move is expected to create close to 6,000 jobs. A further £100 million will be invested to create a Tier-4 data centre, providing customised communication services for enterprises and businesses and another £100 million investment to create a payment bank focused on serving the unbanked and under banked and to accelerate India’s journey towards cashless economy.

King’s College Hospital NHS Foundation Trust and Indo UK Healthcare Pvt Ltd will open King’s College Hospital, Chandigarh. This is the first of a proposed eleven new UK-Indo Institutes for Health that will be developed across India, which, when fully implemented, would amount to a £1 billion investment into India’s healthcare system. A bilateral India/UK taskforce involving government representatives will help drive forward delivery of the proposed eleven UK-Indo Institutes for Health and foster greater collaboration in other areas of this important sector.