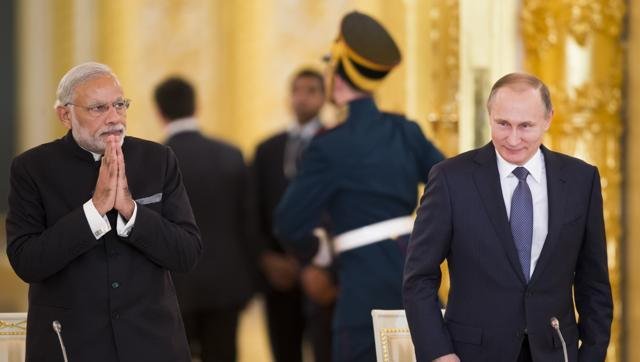 India and Russia signed 16 agreements on defence, nuclear energy and other key areas during Prime Minister Narendra Modi’s visit to Moscow, with the two sides announcing that Russia plans to build at least six new nuclear power units in India, in addition to inking key deals like the production of BrahMos missiles and the attack chopper Kamov-226 in India.

Prime Minister Narendra Modi, on Day 2 of his visit to Moscow, conveyed to Russian President Vladimir Putin that their summit talks would give a fresh impetus to the bilateral relations between India and Russia, referring to Moscow as New Delhi’s “strong and reliable” friend.

As part of the annual India-Russia summit, Modi and Putin held a one-on-one meeting before they were joined by their respective delegations. The two sides continued their deliberations over lunch at the Kremlin before they signed the agreements.

Modi invited Russian CEOs to invest in Indian infrastructure and aerospace sectors, among others, stating that his government had created a favourable environment to boost economic growth.

Hailing the “strong collaboration” between India and Russia in the United Nations, Modi also recognised the understanding shared by New Delhi and Moscow in the BRICS, the East Asia Summit, the G20 and the Shanghai Cooperation Organisation.

The PM also discussed global terror, calling for the world to unite against the scourge without distinction or discrimination between terrorist groups and target countries. Expressing his condolences over the death of over 200 Russian citizens in a plane crash in Egypt in October, Modi also mentioned the recent downing of a Russian military jet on the Syria-Turkey border.

Putin, in his opening remarks during the meeting with Modi, said, “I am pleased to note, and I am happy to do that, that we are consistently and confidently developing the privileged strategic partnership between India and Russia.” He expressed happiness over the two countries going ahead “consistently and confidently” in developing the privileged strategic partnership.

Putin announced that Russia planned to build at least six new nuclear power units in India over 20 years. The Russian President said Moscow and New Delhi were successfully cooperating in the production of Brahmos missiles and planned to jointly produce the Kamov 226 military helicopter, a major boost to the Make in India initiative.

The Russian President conveyed his country’s “strong support” to New Delhi’s bid for permanent membership of the UN security council, calling India a “deserving and strong candidate” that could bring an “independent and responsible approach” within the global body.

A joint statement said the two sides confirmed their interest in intensifying cultural cooperation, announcing the organisation of a festival of Russian culture in India in 2016. The two countries affirmed the need for enhancing cooperation in the information sphere, welcoming a memorandum of understanding signed between Russian state-owned broadcaster VGTRK and Prasar Bharti for exchange of news and other content.

Modi started his second day in Moscow with a tour of EMERCOM, the Russian national crisis management centre, where he interacted with officials at their state-of-the-art office.

Later, the Prime Minister laid a wreath at the Tomb of the Unknown Soldier at Alexandrovski Cad, a war memorial dedicated to Soviet soldiers who died in World War 2.

Putin, while hosting Modi for a tete-a-tete at the Kremlin, presented the visiting dignitary with a page from Mahatma Gandhi’s diary and an 18th century sword from Bengal.

“President Putin also gifted an 18th century sword from Bengal, featuring intricate silver artwork. I thank him for the gifts,” he added.

Modi arrived in Moscow on Wednesday night and was accorded a red carpet welcome. After the welcome, Putin hosted a dinner for the visiting dignitary, where both leaders touched upon issues of mutual interest for both countries.