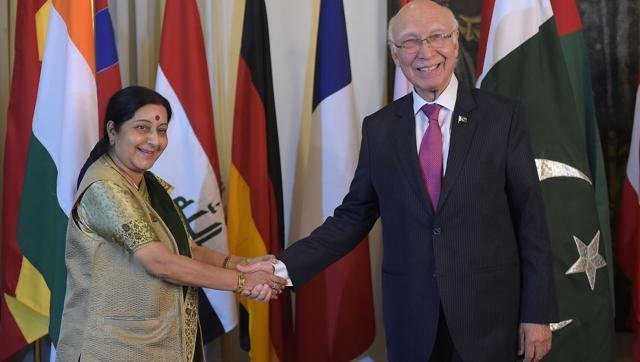 India and Pakistan on Wednesday agreed to hold a comprehensive bilateral dialogue on outstanding issues, including terrorism and Kashmir, a breakthrough that followed several high-level contacts after a prolonged period of ups and downs in ties.

External affairs minister Sushma Swaraj made the announcement about the resumption of dialogue during a joint news conference with Sartaj Aziz, the Pakistani Prime Minister’s foreign policy adviser, at the Foreign Office in Islamabad.

Earlier in the day, Swaraj said Prime Minister Narendra Modi will visit Pakistan to attend the SAARC Summit, expected to be held in September 2016. “He will be coming,” she told the media. This will be the first visit by an Indian Prime Minister since 2004, when Atal Bihari Vajpayee had attended a SAARC Summit.

The comprehensive dialogue will have the eight issues that were part of the earlier composite dialogue and some additional components, said Swaraj, who held back-to-back meetings with Aziz and Prime Minister Nawaz Sharif.

“The biggest thing is that the composite dialogue or the resumed dialogue that was stopped – after the successful talks between our NSAs in Bangkok – we decided today that India and Pakistan will hold a comprehensive dialogue,” she said.

The two foreign secretaries will decide the schedule and modalities for taking the dialogue process forward. Swaraj refused to go into details, saying she had to first make a statement on the development in India’s Parliament on Thursday.

For the first time, the national security advisers will play a key role in talks. A joint statement said Swaraj and Aziz had noted the successful talks on terrorism and security-related issues by the NSAs in Bangkok on Sunday and decided that the “NSAs will continue to address all issues connected to terrorism”.

Under the composite dialogue format, terrorism was handled by the foreign secretaries.

The comprehensive dialogue retains all the issues that were part of the composite dialogue, including peace and security, confidence-building measures, Jammu and Kashmir, Siachen, Sir Creek, Wullar barrage/Tulbul navigation project, economic and commercial cooperation, counter-terrorism, narcotics control and people to people exchanges.

The joint statement said the Indian side was “assured of the steps being taken to expedite the early conclusion of the Mumbai trial”. This was aimed at addressing India’s concerns about the prosecution of those arrested for planning and executing the 2008 Mumbai attacks, including Lashkar-e-Taiba commander Zakiur Rehman Lakhvi.

Swaraj arrived in Islamabad on Tuesday to attend the Heart of Asia conference on security and stability in Afghanistan.

Her visit to Islamabad was confirmed after a brief meeting between Sharif and his Indian counterpart Narendra Modi on the margins of the climate change conference in Paris and the meeting between the NSAs in Bangkok.

Talks between India and Pakistan were snapped after the Mumbai attacks that were carried out by members of the banned Lashkar-e-Taiba. Attempts to revive parleys did not take off because of differences on key issues such as terrorism and India’s insistence on linking talks to the prosecution of those involved in the Mumbai carnage.

Sharif attended Modi’s swearing-in last year, raising hopes for better ties but relations ran into rough weather again after violations of the ceasefire on the Line of Control and New Delhi’s objections to visiting Pakistani leaders meeting with Kashmiri separatists.

India had earlier insisted that talks should focus on terrorism while Pakistan said any dialogue should be without conditions and include the Kashmir issue.