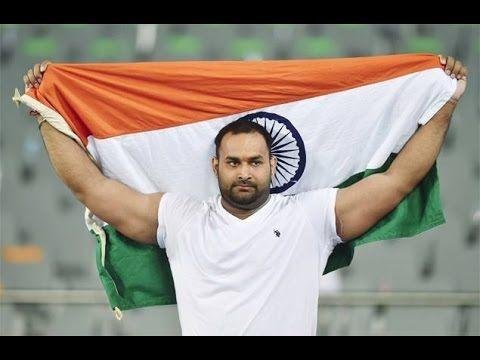 Though Inderjeet committed a foul in his first attempt, he kept improving and in the second throw, covered a distance of 18.79 metres and bettered it to 18.95m in the third. His fifth effort was 19.80m and his 20.27 in the final throw was good enough to win him the coveted yellow metal.

Inderjeet has been in great form for the last two months winning three Grand Prix events in Thailand, qualifying for Rio Olympics in 2016 and winning gold at the Asian Athletics Championships in Wuhan, China.

With the Rio Olympics a year away, India’s athletics community has high hopes on the Asian Games bronze medallist (19.63m), who is a student of Maharshi Dayanand University.

Manish Bahuguna of Anglian Hunt Medal Company believes that Inderjeet can achieve what no other India athlete could achieve in the 120 years of Olympic history.

Bahuguna says, “In the last four Olympic Games athletes have got a medal by throwing the iron ball to a distance of 21 metres. I think he has come very close to it.”

Inderjeet is likely to train under legendary shot-putter John Carl Godina after the world championships next month.

Ironically, despite his recent success, Inderjeet is jobless. He lost his father as a child and it became very difficult to pursue his athletics career. But he did not lose heart. His hard work on the field will probably rewrite his fortunes.