In This India Team, No One Owns a Batting Position: Ravi Shastri 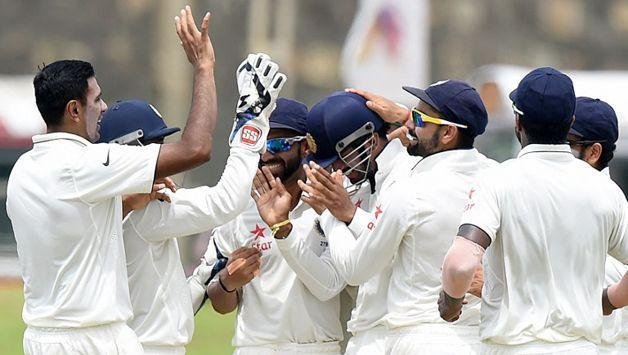 Team Director Ravi Shastri on Thursday termed the performance of the Indian bowlers in the second cricket Test against Sri lanka as the “best in the last couple of years” and hoped for a repeat show in the series-decider.

India grabbed eight wickets in the final morning in quick time to win the second Test by a handsome 278-run margin.

“It was the best bowling performance I have seen from this unit in the last couple years. Especially on second and third day, where in parts, they didn’t get any wickets but the discipline was there. They kept on the pressure and when wickets started falling it showed,” Shastri said at the pre-match media conference here.

“So they can do the same in this match and I don’t see why not, because they did it in the last Test,” the former India captain said.

Shastri also stressed on the fact that the batting order of the side will remain flexible and depending on match situations, it will be changed accordingly.

“In this team, no one owns a batting position. It all depends on the situation. We will play horses for courses and see what the situation and the opposition demands.

“Accordingly, we will see what the best batting position in the side is for each batsman against that particular outfit and seeing the state of the series,” Shastri said answering a query on Ajinkya Rahane’s promotion at No 3 in place of Rohit Sharma, who struggled in the first Test.

Shastri, who is known for his tough talking, again reiterated that winning is what matters to the team as they go into the third Test.

“Nothing has changed from Galle. We play only for one reason and we play to win. Now we are in a position where if we can win this Test, we win the series which is massive. So there is no point being shy of going for a win,” said the veteran of 80 Tests.

“At the same time, it is a case of not being overconfident. We need the right balance and we need to play proper cricket like we did in the last Test,” he added. When asked how confident the team is about winning a Test series in Sri Lanka after 22 years, Shastri said, “In 23 years, even I have forgotten. I know it is 1-1 now and we have a chance to win. We will take one day at a time and we have to focus on the basics.”

Shastri said that the numerous times, he has visited the country as a commentator, he has found the SSC track to be a batting paradise where finishing one innings of both teams used to be difficult.

“I remember commentating a lot here with matches not getting over at the SSC. The first innings did not get over until the fifth day. And with the series being as it is, we want both teams to play exciting cricket,” he added.

Shastri did not comment on team selection apart from naming Naman Ojha as the first choice keeper.

“There is still quite a bit of grass on it. We will wait until our practice gets over. We will then have a look at it and decide what should be the combination tomorrow. But Ojha is the first-choice keeper in this squad, unless we really want to do something else with the combinations.”

Shastri was all praise for young KL Rahul, who won the man-of-the-match award for his classy century in the first innings.

“Rahul is a bright young prospect. He didn’t get the runs in Galle but he has the temperament and is a tough player. He had two poor innings in Melbourne and a lot of teams wouldn’t have stuck with him. But we stuck with him, and in particular Virat had a lot of confidence in him.

“So we picked him for the next match in Sydney and he responded with a hundred. Same thing here, we stuck with him and he again got a hundred. He also took a catch (as stand-in keeper) on the last day, so his contribution was tremendous.”

The Team Director lamented the loss of Murali Vijay through injury ahead of this all-important match.

“Fitness issues with any player hurts you. More so with Vijay, because he is prolific. Even at 80 percent fit, his knock was crucial in the second innings. If you look at the last year, the number of runs he has scored is right up there with Virat and Rahane, so his presence is very important to the side,” Shastri said.

As India stand on the cusp of a rare Test series win, Shastri also mentioned Mahendra Singh Dhoni’s contribution and his decision to quit longer format paving the way for Virat Kohli to take over.

“When MS Dhoni quit, it was very clear who should be the next captain. And you look back at that decision, it was one of the reasons why MS decided to quit. He wanted Virat to lead in that last Test in Australia because India weren’t playing for another 6-7 months.

“In time, we will see how ready Virat is as captain as it is too early to say. Every captain is different. Virat is in your face all the time and there is intent in everything he does,” Shastri signed off.