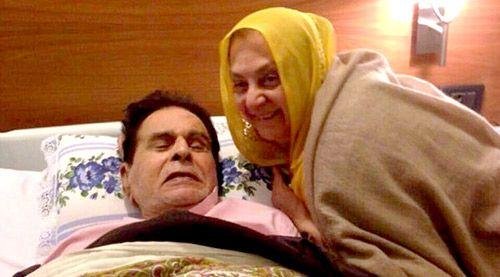 India’s most distinguished actor Dilip Kumar, now 93, is in hospital again. But his devoted and completely in-control wife Saira Banu is not tense any longer. On Sunday morning the very gracious Banu expressed optimism about her husband’s quick recovery.

Says Sairaji, “His MRI test shows all clear. Thank God. Please pray that all is well. God willing he will soon be well and can be at home.”

Sairaji who married India’s most eligible entertainer in 1966, snatching him away from some of the beautiful women in Bollywood who wanted to marry him, has been single-mindedly devoted to looking after him through all these years.

Says Sairaji, “It has been entirely my privilege and honour. Main toh unke paon ki dhool bhi nahi (I am not even the dust on his feet). He could have married anyone, any woman he wanted. He chose me. I consider myself very very fortunate. I always call him the Kohinoor of the film industry. I am lucky to be so close to him for so many years. I couldn’t have chosen a better life. I can’t imagine any other life for me.”

Tell her Dilip Saab was fortunate to have such a devoted wife and she jokes, “Haan, I guess if I was chosen to be his wife I must be special. Unki biwi hone ke liye caliber honi chahiye (to be his wife one needed to be of some calibre). But seriously, all Indian wives look after their husbands. In my family I’ve seen women being devoted to their husbands. I grew up watching that. To me, it is a very natural thing.”