Hillary Clinton, Donald Trump Clash And Interrupt Each Other In First US Presidential Debate 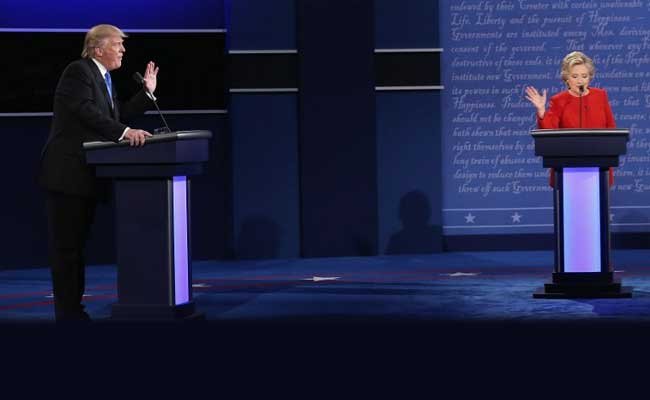 HEMPSTEAD, UNITED STATES:  Democrat Hillary Clinton and Republican Donald Trump clashed over the economy and foreign policy and interrupted each other repeatedly on Monday in a first presidential debate that could reshape the 2016 US election.

After greeting each other with a handshake and a smile, the two opponents went on the attack, with Clinton calling the New York businessman’s tax policies “Trumped-up trickle-down” economics and Trump accusing the former secretary of state of being “all talk, no action.”

Each accused the other of distortions and falsehoods and urged viewers to check their websites for the facts. She called him Donald, and he called her Secretary Clinton.

“I have a feeling I’m going to be blamed for everything,” said Clinton, the first woman to win the presidential nomination of a major US political party during one tough exchange.

“Why not?” retorted Trump, a real estate tycoon and former reality TV star making his first run at public office.

Clinton criticized Trump for not releasing his tax returns and said that decision raised questions about whether he was as rich and charitable as he has claimed to be. She noted that the few years of returns he had released showed that despite his wealth, he paid no federal income tax.

“That makes me smart,” Trump said.

“I have a tremendous income,” he said at one point, adding that it was about time that someone running the country knew something about money.

Clinton criticized Trump for failing to pay some of the business people with whom his company had contracted. She said she had met a lot of people who had been cheated by her opponent.
Trump said such incidents of non-payment had taken place when the work was unsatisfactory.

Trump attacked Clinton for her trade policies and said she would approve a controversial trade deal with Asian countries despite opposing it as a candidate.

“You were totally in favor of it, then you heard what I was saying, how bad it is, and you said, ‘Well, I can’t win that debate,’ but you know that if you did win, you would approve that,” he said.

“Well Donald, I know you live in your own reality, but that is not the facts,” she said.

Clinton, 68, wore a red pantsuit, and Trump, 70, wore a dark suit and a blue tie to the encounter that could shift the course of the tight race for the Nov. 8 election.

Moderator Lester Holt struggled to rein in the candidates, with discussions about trade policy suddenly shifting to the fight against ISIS as Trump accused Clinton of giving away information to the enemy by revealing on her website how she planned to defeat the group.