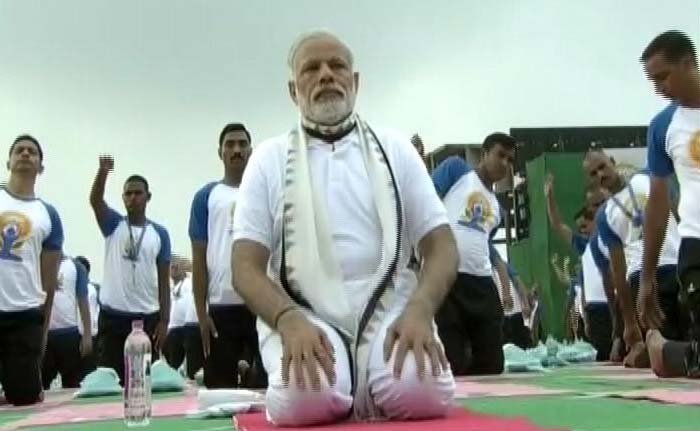 NEW DELHI: Prime Minister Narendra Modi launched the second International Yoga Day celebrations in Chandigarh on Tuesday. PM Modi addressed thousands of people gathered for asanas at Chandigarh’s Capitol Complex. Over 30, 000 people, including 100 differently-abled children, participated in the event, which began at 6.30am. The theme of this year’s event is to ‘Connect the Youth’. Here are the highlights from the PM’s address on Yoga Day:

Yoga talks about what you will get in this life. It is not a science of afterlife

The way mobile phone has become a part of life, you can make yoga a part of your life too

The UN is celebrating International Yoga Day all over the world. It was started last year on India’s request. This day was picked as it is the longest day and the Earth is closest to the Sun

The world supported the idea of International Day of Yoga. All sections of society came together in this endeavour

With zero budget, yoga provides health assurance. Yoga does not discriminate between rich and poor

Important to integrate yoga with our lives. Do not wait, make yoga a part of one’s life

Yoga will connect you to yourself, which is vital in these times when everyone is so busy

Let’s focus on one thing in the coming days, how to mitigate diabetes through yoga. Diabetes can surely be controlled through yoga

PM also talked about two yoga awards, one international and one for India. PM says we want to honour those working to popularising yoga