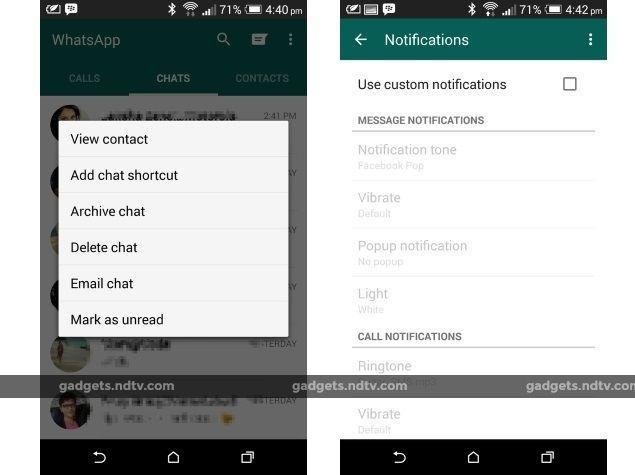 WhatsApp has introduced several new features to its Android app including the recently tipped ‘mark as unread’ feature, alongside custom notifications, among others.
The most widely used instant messaging service has been on an update releasing spree and has outed successive WhatsApp for Android updates bumping the version v2.12.189 to v2.12.194.

The WhatsApp for Android update brings custom notifications settings for individual contacts or groups. The new setting can be found in a contact’s or group’s detail page just below the media box.
The notification setting box includes options to mute chat as well as a new custom notification option. The feature lets users to select custom options for tones, vibration length, popup notification, and others.
The update also brings much-anticipated mark as unread feature that allows users to mark a chat as unread by just tapping and holding any conversation. Notably, the mark as unread feature doesn’t switch the status for sender and only makes changes at the receiver’s end. The feature can be useful in case where a user wants to come back to a chat at a later time.

WhatsApp for Android update also adds low data usage option for voice calls, which can be useful at locations where there is limited connectivity. Another change spotted hints that WhatsApp is once again bringing the Google Drive backup and restore option back, which was introduced back in April but removed shortly after.
It’s worth noting that the most recent version of WhatsApp for Android is yet to reach Google Play (which still features v2.12.176 in India) and thus, users will have to wait a bit for these features. The WhatsApp for Android update was first reported by Android Police. Those who can’t wait can head to WhatsApp’s page to get the latest update.