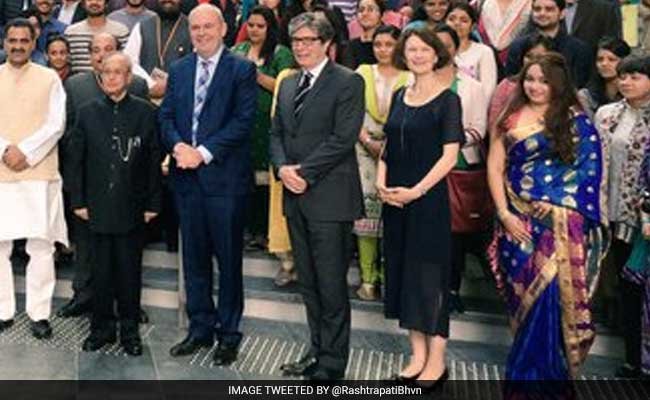 Auckland:  As she walked along with President Pranab Mukherjee, Indian-born Rebecca Taylor, a ‘Guinness’ record holder, could hardly imagine that her dream will one day come true in New Zealand far away from her Bengaluru home.

“When I used to see the grandeur of Rashtrapati Bhavan during my childhood, I always wondered whether I will be able to meet any of its occupants. I never knew that it will come true thousands of miles away,” said 29-year-old Rebecca Taylor, who is doing a degree course in Event Management at Auckland University of Technology.

The President was in Auckland on May 2 for a function organised by the University where he addressed the students during the course of his state visit to New Zealand.

The President had spoken about his ardent love for teaching and said he had accepted the invitation as “a teacher in me, which of course I buried almost five decades ago when I entered into Parliament, still remains.”

“When I meet the shining eyes, bright mind, receptive and always questioning, young men and women, sometimes that instinct arises in me and try to convert myself as a teacher, always not acceptable, may be more than of a nagging but nonetheless a teacher,” he had said.

But Ms Taylor who holds Guinness world record for making the largest tea light candle, had her moment of glory when she presented her art work to the President in which she had interspersed traditional design and colour, representing the Indian National bird, animal and flower, with a dash of a silver fern which is widely representative of New Zealand. “The design itself comes together with traditional mango motifs that tell a story of the two nations and the environment,” she said.

“Beautiful”, was the immediate reaction of the President on receiving the art work and congratulated her for holding a Guinness record.

The University Vice Chancellor Derek McCormack’s words asking Ms Taylor to accompany the President to his car were music to her ears and she could not control her excitement. “He was the best teacher I could have had and of course even if he termed himself as a nagging teacher, I would like to have such a teacher who himself is a walking encyclopaedia on global and country’s history,” she said.