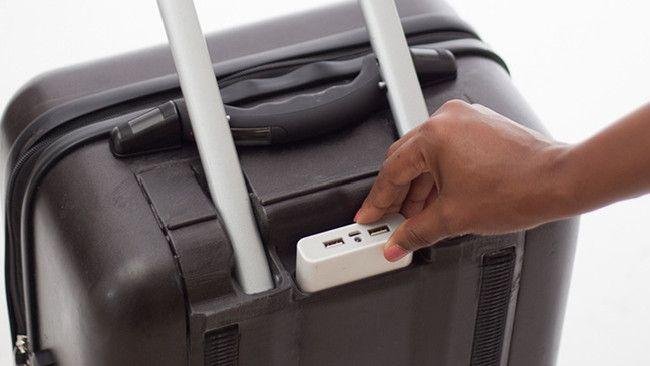 AT LAST, the suitcase we’ve been waiting for is finally here.

A couple of legends in the United States have come up a prototype for a suitcase which they say rolls smoothly up and down stairs — without you having you pick it up and lug it yourself.

Called the TraxPack, this smart bag is outfitted with “tank tracks” — just like you’d see on a military tank — which allow the bag to glide over the stairs as you pull it minimal effort.

It’s being heralded as the world’s first stair-climbing suitcase — and that’s not even all this nifty piece of luggage can do.

It had a GPS tracking system, a fully manoeuverable handle, built-in weight scale, USB charging docks and media stand, and TSA-approved locks and extra-strong zippers to keep your things even more secure.

It pretty much fulfils any travel-related problem TraxPack co-founder Naisha Joseph has ever had.

“I had issues from losing my bag to having to carry a heavy bag up a broken escalator, incurring unexpected fees at the gate, my phone would be dead (and) I couldn’t make any calls — I had all these issues,” she said.

“I guess all my complaining finally paid off because Richard (co-founder Richard Braddock) took it upon himself to go ahead and build this bag that was supposed to solve all my issues.”

Braddock said the Trax system was designed to simply make it easier for people to go up and down stairs with their suitcase: “Whether it be an escalator in the airport that isn’t working, or let’s say you want to get your bag from the bedroom downstairs to the door so you can go to the airport,” he said.

He said the suitcase’s unique handle was also carefully planned out.

“Most suitcases all have a straight handle we have both a vertical handle and a tilted handle, and what that tilted handle does is it makes the manoeuvrability much more enhanced,” he said.

“You can pull it, you can push, it you can ride it on your side — you literally have full, 360-degree control over your bag.”

Braddock and Joseph, of Florida, have launched a Kickstarter campaign so they bring the TraxPack to the world.