Gavaskar, Ganguly back skipper Dhoni after his offer to step down 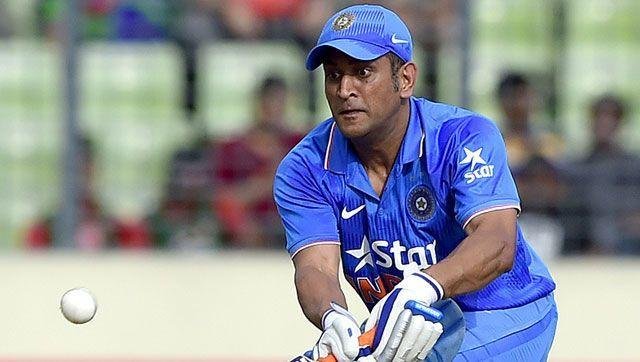 Under attack after India’s shock defeat in the ODI series against Bangladesh, Mahendra Singh Dhoni has offered to step down as captain but several former players, including Sunil Gavaskar and Sourav Ganguly, expressed their opposition against such a move.

After India’s series defeat, Dhoni had said at the post-match press conference that he was willing to resign as captain and contribute as a player if it guaranteed success for Indian cricket.

“I am really enjoying my cricket… if it is justifiable if you remove me (as captain) and Indian cricket will start doing well, and if I am the reason for all the bad that’s happening to Indian cricket, definitely I would love to step away and play as a player,” Dhoni said at the press conference in Mirpur.

“I am always the one who is responsible for anything bad that happens in Indian cricket. Everything that happens is because of me. Even the Bangladesh media is smiling,” he said sarcastically.

But several former Indian cricketers put their weight behind the beleaguered skipper and said that he should continue as captain of the ODI team.

Former Indian captains like Gavaskar, Ganguly, Bishan Singh Bedi, Dilip Vengsarkar and Ajit Wadekar, and players like Chetan Chauhan, Chandu Borde and Syed Kirmani strongly backed Dhoni, saying that there was no need to press the panic button and he is the best bet till the 2016 World T20.

Gavaskar said it is too early to write off Dhoni and called him the best Indian ODI skipper ever and said that he still has a lot to offer. He advised against knee-jerk reactions and said the decision should be left to Dhoni.

“It is a decision he has to take. Look, you can’t take away the achievements from him. He is India’s best captain by far. He has done almost everything, be it T20s, ODIs, Champions Trophy or World Cup. He took India to the number one ranking in Tests. So his achievement is manifold,” Gavaskar told NDTV.

“He deserves respect and recognition for it and it should be up to him whether he feels up for the job, whether he has the enthusiasm. I do not think it would be fair to remove him as captain. It is a decision, which out of sheer respect for the man, should be left to him.”

Meanwhile, Ganguly said one must not take whatever Dhoni said very seriously since his words were a result of frustration after the loss.

“He has said it in the heat of the moment and it’s not right. He was upset after the defeat. Leave it there. Everybody has to sit together and think. Don’t put MS Dhoni down, he has a terrific record in ODIs. Give respect to him,” Ganguly told a TV Channel.

When asked if he thinks Dhoni should continue as captain at least till 2016 World T20, Ganguly said, “It’s not an individual decision. Let’s cool down, let the series be finished. Such a decision can’t be taken overnight.

“Whoever has to take a decision, has to take the long-term aspect in mind. There is the BCCI president, secretary general and office bearers. He should be given all the time in the world. Whether he wants to continue and has the power to lift the side.”

Vengsarkar also came out in support of Dhoni. “I don’t think Dhoni should be replaced. He recently led India to the World Cup semifinals and this series is the first series after that. He should continue as captain,” he told PTI.

Bedi, known for his forthright views on Indian cricket, did not want to single out Dhoni for the team’s debacle in Bangladesh.

“I am not blaming an individual, rather it was the team’s lethargy that cost India the series. Regarding Dhoni’s captaincy issue, I can’t say much. Nothing is coming out clear at the moment. See what he spoke to the media was just out of sheer frustration. He was just being sarcastic,” he said.

“That’s part and parcel of being a leader. You are lauded when victorious and criticised in defeat. He has already left the Test captaincy. About ODIs, I don’t know. But it’s the first time I have seen him ruffled and that’s not a good sign anymore,” Bedi added.

Wadekar said that Dhoni was still the best person to lead India in ODIs and T20s.

“I think he’s still the best bet for captaincy in ODIs and T20s. I suppose he should be retained as captain. It was amazing (the loss). They perhaps did not take Bangladesh seriously. They probably did not get enough time to prepare for the ODI series,” said Wadekar.

“I would like to continue with Dhoni. He’s a great performer. You need not be harsh on him just because he lost a series to Bangladesh. It’s just a passing phase. I think there’s always a general feeling that a captain should be removed. All these things come up when a captain loses a series or is in bad form,” he said.

“England had earlier changed captains but that did not translate into performances. It’s, after all, a team effort. You have to win a few and lose a few. It’s a learning process.”

Chandu Borde said the Bangladesh series defeat was a one-off affair and Dhoni should continue as captain.

“Dhoni should continue and this is a one-off upset according to me. But it will take some time to recover. Bangladesh surprised us, didn’t they? Our boys did not show any intent while the Bangladesh players’ body language was excellent,” he said.

Former opening batsman Chetan Chauhan said Dhoni is still a capable leader and there is no need for a change of leadership now.

“I would not like to hastily arrive at a decision based on one particular series. Also, I would want Virat to captain only in Tests this season. For me, Dhoni should remain the captain in ODIs and T20s till next year’s World T20 in India. One can think about a change of guard after that. He is still a capable leader and a good player.

“Exhaustion may be a reason but the only one decision in his captaincy that baffled me was dropping a class player like Ajinkya Rahane. That did not make any sense to me,” said Chauhan.

Former wicketkeeper Vijay Dahiya, on his part, said that any change in ODI captaincy at the moment was uncalled for.

“No need to press the panic button. Any change in ODI captaincy I feel at the moment is uncalled for. Dhoni knows how to play according to situations. I would like Dhoni to continue as after retiring from Tests, he has enough time to concentrate on the other two formats and may be rework his strategies,” Dahiya said.