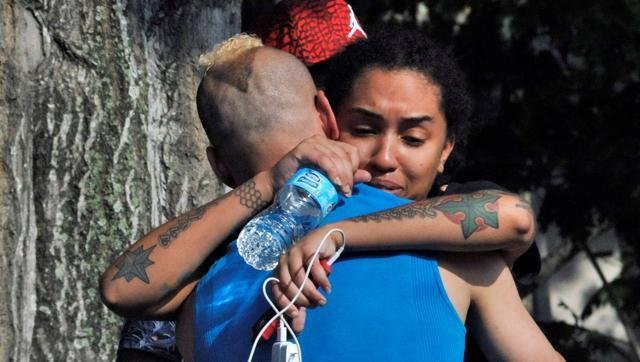 At least 50 people were killed and 53 wounded in the worst mass shooting in US history when a lone man armed with an assault rifle and a handgun opened fire at a gay nightclub in Orlando, Florida, late Saturday.

The authorities have described the incident as a likely terrorist attack.

The shooter, who was later killed in a gunfight with police SWAT teams, was identified by officials as 29-year-old Omar Saddiqui Mateen, a US citizen of Afghan descent residing at St. Lucie County in Florida. He was a trained security guard.

President Barack Obama called the shootings “an act of terror and an act of hate”, and said the FBI was investigating it as an act of terror. He also renewed his call for reconsidering the country’s gun laws.

While there is still no official word on the shooter’s motives, Congressman Adam Schiff – the senior-most Democrat in the House of Representatives’ permanent select committee on intelligence – told CNN that local law enforcement officials believe Mateen had pledged allegiance to the Islamic State.

Mateen also reportedly called 911 – the US emergency number – and claimed allegiance to the terror organisation. The attacker mentioned Boston marathon bombers Tamerlan Tsarnaev and Dzhokhar Tsarnaev, media reports said, adding that he was understood to be on the FBI’s watchlist as an Islamic State sympathiser.

However, when asked earlier at a news briefing if the gunman had links to jihadist terror groups, FBI assistant agent-in-charge of the area Ron Hopper said, “At this time, we’re looking at all angles… we do have suggestions that this individual may have leanings towards that, that particular ideology. But we can’t say definitively right now, so we’re still running everything around.”

If confirmed as a terror attack, this will be the deadliest incident of the kind to occur on the US mainland since September 11, 2001. This would also be the second terror attack since then, the first being the December 2, 2015 shooting in San Bernardino, California, when a married couple of Pakistani descent gunned down 14 people before being killed in a firefight with law enforcement officers.

Republican presumptive nominee Donald Trump, who called for a temporary ban on Muslims entering the US after the San Bernardino attack, was more restrained this time.

“Really bad shooting in Orlando. Police investigating possible terrorism. Many people dead and wounded,” he said in a tweet. But he may ratchet up the rhetoric if a link to Islamic terrorism was indeed established.

Witnesses told local media outlets they first heard gunshots around 2 am, even as the nightclub – Pulse Orlando – was about to close. Some of them recalled hearing 40 shots or more.

Local police said the shooting started in the nightclub and continued outside when an officer in uniform doing extra duty engaged the gunman. Then Mateen went back into the club and took hostages.

At about 3am, the club posted a message on its Facebook page: “Everyone get out of pulse and keep running.”

The New York Times cited Christopher Hansen, a witness, as telling a local TV station: “Cops were saying, ‘Go, go, clear the area … You don’t know who’s what and who’s where’.”

Police SWAT teams stormed the club after a controlled explosion, at around 5.00am. They found the gunman, who was wearing an explosive device, lying dead inside.