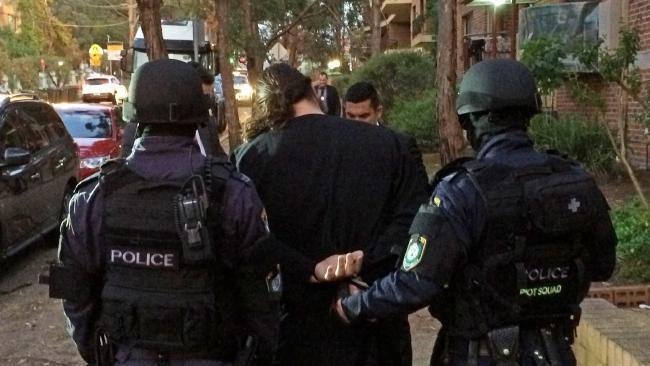 AT least three of the men arrested in counterterrorism raids across Sydney today had been targeted in terror raids last year over a plot to behead a member of the public.

The arrested include a 16-year-old schoolmate of teen gunman Farhad Jabar and the schoolmate’s 18-year-old brother.

Four men and a teenage boy were arrested in total this morning following Friday’s terrorist attack on police headquarters and the murder of Curtis Cheng.

Addressing media in Sydney Deputy Police Commissioner Catherine Burn confirmed some of those arrested had previously been targeted in counter-terror operations.

“We know some of the people we are now interested in are people that have come under notice previously,” Ms Burn said.

Last September, police carried out sweeping pre-dawn counterterrorism raids in western Sydney as part of Operation Appleby, uncovering a terror cell which planned to publicly execute a person in Sydney.

Now in custody at various police stations, the men will be questioned over their involvement with Friday’s attack and in some cases, links with Islamic State.

One line of inquiry, Deputy Police Commissioner Catherine Burn confirmed, would be over how Cheng’s murderer obtain the gun he used in Friday’s attack.

The Daily Telegraph is reporting the weapon used by the teen terrorist was believed to be sourced from a Middle Eastern Crime gang, and was handed to the schoolboy at the Parramatta mosque which he visited before the shooting.

Ms Burn confirmed some of the people targeted in this morning’s raids had attended the mosque. She said police were investigating the source of the firearm, and confirmed investigators suspected Jabar had not acted alone.

Ms Burn said today’s operation was “a clear indication of our determination to actually find out who murdered Curtis Cheng and to take all necessary action that we possibly can”.

“It’s a very, very serious concern that in the heart of our community there is attack planning that is underway and that may have led to what we saw on Friday,” she said.

A police spokesman confirmed the arrests were in relation to the fatal shooting of Mr Cheng.

Mr Cheng was executed as he left work on Friday at 4.30pm by teen terrorist Farhad Jabar.

This morning’s raids were co-ordinated with the counterterrorism squad and homicide squad.

More than 200 armed NSW officers as well as the Australian Federal Police arrested the five men aged between 16 and 24.

Ms Burn said Farhad was not on the police radar and “not somebody we would have assessed as a threat”.

“I’m not going to speculate on the motives of either the 15-year-old or anybody else who might be connected with this,” she said.

“It’s difficult because we don’t really know the motivation of the 15-year-old, however, we are dealing with this as — what we are investigating is a terrorism offence so what we would suggest and we suspect is that there was some influence, whether it was ideologically, religious or politically motivated, that determined and influenced the 15-year-old to go and commit this horrendous act of violence.”