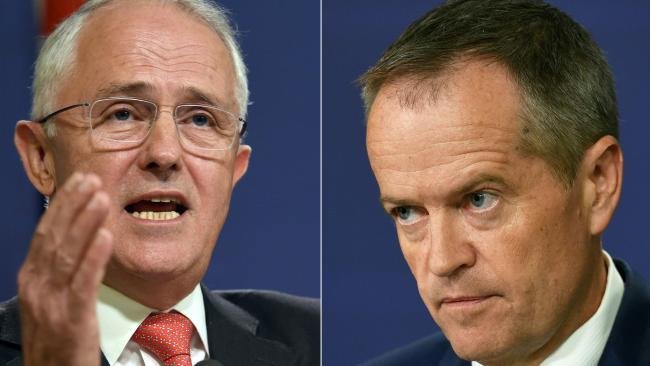 Malcolm Turnbull has fired the starting gun on a 55-day election campaign, placing jobs, growth and economic management at the heart of his re-election pitch and warning a switch to Labor would “stop our nation’s transition to the new economy dead in its tracks”.

Opposition Leader Bill Shorten has fired back by promising to protect schools, hospitals, workers’ pay and conditions and to act on climate change – in pointed contrast to Mr Turnbull, who did not mention global warming in his election pitch – while stressing Labor’s unity of purpose and commitment to fairness.

Mr Turnbull said Australians had a clear a choice between the Coalition’s commitment to jobs and growth, Mr Turnbull said, or going back to Labor “with its high-taxing, higher spending, debt and deficit agenda”.

The Prime Minister said he would be “seeking the mandate of the Australian people to continue and complete that national economic plan, because that is the key to us achieving and realising the great opportunities of these exciting times”.

In a clear sign the government plans to run a scare campaign on the potential for house prices to fall under Labor, Mr Turnbull warned Labor’s proposed changes to negative gearing laws would “deliver a massive shock to the property market at a time as the Reserve Bank governor said only a few days ago property prices are moderating. It puts at risk the investments of millions of Australians.”

“The choice cannot be clearer at this election. We have an economic plan for growth and jobs … on the other hand, our opponents are promising to increase income tax, they are opposing a tax cut for Australian businesses. They are proposing to increase capital gains tax by 50 per cent, a tax on investment.”

Mr Shorten spent the afternoon in Beaconsfield, Tasmania, to mark the 10th anniversary of the mining disaster that thrust him onto the national stage.

He said Labor would deliver “fairness twinned with economic growth”, whereas re-electing the Coalition would deliver three more years of dysfunction and dithering.

The Opposition Leader said it was “frankly…amazing that in Mr Turnbull’s pitch to be re-elected, he did not even mention climate change”.

“[Mr Turnbull] famously said that he did not want to lead a party that was not interested in climate change. Now he has a brushed climate changed out of his presentation altogether,” Mr Shorten said.

Mr Shorten raised the spectre of the states being able to levy their own income taxes, the Commonwealth withdrawing funding from state schools and a rise in the GST – all ideas floated by the Turnbull government and then abandoned – while hammering home the point that Labor was committed to fairness.

“He’s going to spend $50 billion of budget money over the next 10 years, Australian taxpayers’ money, to give big business a tax break,” he said.

“We have proposed not spending and handing back money in the form of tax cuts for people on a million dollars a year. We have proposed saving money to the budget bottom line, by reforming negative gearing and capital gains tax laws…Labor has announced a proper path of budget repair that is fair.”

Meanwhile, the Prime Minister stressed the Coalition’s record on border protection, its plan to build 12 new submarines and navy frigates as part of its defence industry investment plan, the importance of science and innovation, and the need to pass laws to re-establish the Australian Building and Construction Commission in his re-election pitch.

Almost eight months after replacing Tony Abbott as prime minister, Mr Turnbull asked Governor-General Sir Peter Cosgrove for a double dissolution poll – the first since 1987 – that will see 150 lower house seats and all 76 Senate seats up for grabs.

“Do we stay the distance with our national economic plan for jobs and growth? Or do we go back to Labor, which has no plan, only politics?

The most recent Fairfax-Ipsos poll, published in April, had the Coalition and Labor running neck and neck at 50-50 in the two-party preferred vote, a result replicated in most other major polls.

But the election is seen as the Coalition’s to lose as it has a 90 to 55 seat majority in the lower house, while Mr Turnbull still enjoys a commanding lead over Mr Shorten in the two leaders’ personal ratings.

The much anticipated announcement marks the start of a lengthy 55-day campaign, the second longest in Australian history, and comes just days after Mr Turnbull and Treasurer Scott Morrison handed down their first budget last Tuesday.

Labor, in turn, placed $71 billion of savings over 10 years at the heart of Mr Shorten’s budget reply speech on Thursday night.

Mr Turnbull rejected suggestions the government’s budget and economic policies were unfair and said they were necessary after being left a “mountain of debt” and structural deficits.

In contrast, “every measure we have laid out, every single one, will deliver stronger economic growth and more jobs,” he said.

The Prime Minster said election debates had not been discussed but that “I look forward to a number of them”.

Both Mr Turnbull and Mr Shorten are expected to begin day one campaigning in Queensland which, along with New South Wales, is one of two key battleground states that will determine the result in election 2016.

The Coalition currently holds 90 seats and Labor 55 seats in the lower house, but following the redrawing of electoral boundaries in NSW and Western Australia, the Coalition holds a notional 89 seats and Labor 57 seats – with 76 seats representing the minimum number required to win government.