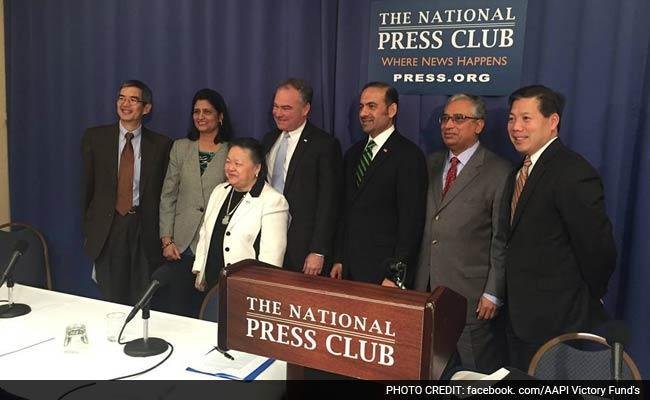 Aiming to leave an impression on the US presidential election race and play the role of a ‘king-maker’ in key states, Asian Americans and Pacific Islanders have launched a political action committee (PAC).

AAPI or the Asian American and Pacific Islanders communities including Indian Americans will encourage Asian Americans to register as electorates and then motivate them to come out and vote in large numbers. The founders said yesterday that the panel would also endorse a candidate as the election approaches.

“These are the states which have made the (margin of) difference in the last few presidential elections for either a Democrat or a Republican,” he said.

The population of Asian Americans is significant enough in each of these States to make a difference “in a close race” he said.

Noting that in key battleground states, the margin of victory is less than the potential AAPI electorate, Virginia Senator, Tim Kaine, said that political candidates can’t afford to ignore or underestimate this community because Asian Americans and Pacific Islanders are that “narrow margin of victory”.

“Now is our moment,” Chris Lu, the Deputy Secretary of Labor Lu said adding, “For far too long, Asian Americans have sat on the sidelines in politics. We know the number of people that are naturalizing, the numbers that are voting, is increasing – but we need to do more”.

“Asian American immigrants have among the highest rates of naturalization in the US at 59 per cent compared to 47 per cent among all immigrants,” Mr Lu said.

“The Victory Fund’s work to increase civic engagement within the AAPI community underscores the strong impact that new Americans and those eligible for citizenship will have in the upcoming election,” he added.

“And those who indulge in politics of race, division and bigotry face an Asian Americans community mobilised across the country,” he said.