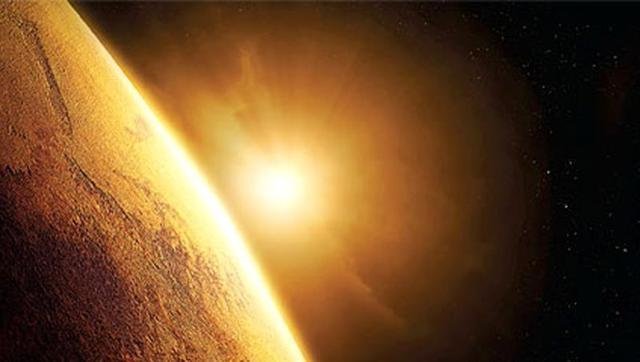 SCIENTISTS have found evidence that ancient tsunamis once washed over Mars’ surface.

These waves, which are thought to have been triggered by meteorite impacts, would have shaped the planet’s landscape and coastline over three billion years ago. Back when the planet was wetter and warmer.

The findings could provide additional clues in the search for life.

The tsunamis are thought to have numbered in the dozens over hundreds of millions of years, but the study, published in Nature’s Scientific Reports, focused on two that happened a few million years apart.

The scientists used images captured by the Mars Odyssey Orbiter, Mars Reconnaissance Orbiter and Mars Global Surveyor to examine two sets of deposits in a large region at the edge of Mars’ northern lowlands.

Their findings concluded that the sediments could have only reached their resting place by the two tsunamis.

The first carried boulders and debris tens, even hundreds, of kilometres inland. The second rose up during a much colder period, tossing off huge blocks of ice as the waves froze in midair.

Rodriguez and his team traced the ground zero of the tsunamis to two craters each about 30km across.

The giant waves would have averaged about 50m in height, but likely rose up some 120m as they ripped up shorelines and rushed inland.

The giant waves would have averaged about 50m in height, but likely rose up some 120m as they ripped up shorelines and rushed inland.

They each submerged areas roughly the size of France and Germany combined, before retreating back into the primordial Martian sea.
No other explanation can account for the formations uncovered, said Alexis Rodriguez, a researcher at the Planetary Science Institute in Tucson, Arizona.
“The shapes of the deposits we mapped are indicative of upward flows, powerful enough to transport boulders hundreds of kilometres,” he explained by email.
Mars is surely the most scrutinised planet in our solar system (besides our own), and yet no one seems to have noticed the evidence of mega-waves in the Red Planet’s past.
“My guess is that we were trying to find shorelines on Mars like those we typically see on Earth,” Rodriquez said.
The second tsunami could provide a new hunting ground for signs of life early in Mars history.
The ice it cast off is probably made of water from the ancient ocean, creating frozen time-capsules billions of years old.
To have originally been in liquid form despite deeply negative temperatures, the water must have been very briny — dense, in other words, with salt.
“Subfreezing briny aqueous environments are known to be habitable on Earth, and consequently some of the tsunami deposits might be prime astrobiological targets,” said co-author Alberto Fairen, a researcher at the Center for Astrobiology in Spain.
Icy specimens are not far from the Mars Pathfinder landing site, and the researchers point out that future landers could collect and analyse samples.
The evidence also bolsters the theory that massive floods transformed Mars’ northern lowlands into a sprawling ocean 3.4 billion years ago, the study said.
Some scientists had challenged that notion, pointing out that the alleged shoreline of this long-gone sea is today ragged and uneven — not a landscape one would expect to find ringing an ocean.
“Our discoveries reconcile the ocean hypothesis with the puzzling absence of shorelines distributed along a constant elevation,” Rodriquez said.
Only time will tell whether these clues will give some answers in the ever-elusive search for life.