Everything you need to know about Siri-driven Apple TV 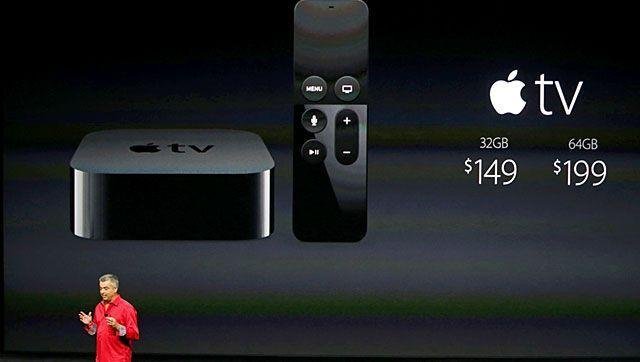 Apple on Wednesday unveiled a new television streaming device — Apple TV — with voice search, a touchscreen remote control and an app store in a challenge to Google, Amazon, and video game console biggies.

“Our vision for TV is simple, and perhaps a little provocative,” Apple CEO Tim Cook said at an unveiling event in San Francisco. “We believe the future of television is apps.”

Here is what you need to know about the Apple TV:
*Apple released a software kit for outside developers, and showed off early versions of Apple TV applications already being crafted by show streaming services Netflix, Hulu, and HBO.
*Game makers are already working on applications, as are home-sharing service Airbnb.
*Siri virtual assistant software built in Apple TV allowed for natural language searches for shows, say by asking for something funny or a certain actor by name.
*The new Apple TV will launch in late October at a starting price of $149.

Why was it important for Apple?
*Apple TV has lagged rivals with similar devices. According to the research firm Parks Associates, Roku leads the US market with a 37% market share, to 19% for Google Chromecast and 17% for Apple TV. Amazon’s Fire TV devices have 14%. Apple needed an upgrade to extend its reach in this market.
*Expectations have been rising for a revamped Apple TV since its release in 2007. The company was losing out on the buzz in the television streaming sector with its long absence.
*Nearly 20% of US broadband households own at least one streaming media player, and Apple has a long way to go in the market.
*Cook described the new Apple TV, a product which the company long called a ‘hobby’, as the future of television. A showstopper event like Wednesday’s will help shed the ‘hobby’ tag from the Apple TV.
*”We’ve been working really hard, and really long,” on TV, Cook said, emphasising the word ‘long’ in a nod to the time it has taken the company to produce an ambitious TV product.
*Twitter users were generally impressed with Apple TV, with some people joking that they would have to buy a TV to use the Siri remote and app store. The initial reactions showed the Apple TV was well received.