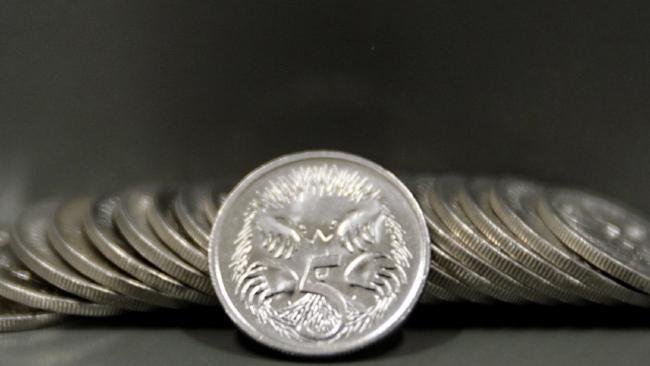 THIS could be the day the five cent coin cashes in its chips and moves on to currency heaven.

After 50 years, inflation has made our lowest denomination coin more a hindrance than a help and tonight’s Budget could be its obituary.

Cashless payments via credit cards has helped make the littlest coin redundant in many transactions.

And just as important for a cash-conscious government, it now costs six cents to make each five cent coin, the Mint has reported.

Its removal from our pockets would bring big changes.

It would lead to new prices as retailers and customers became used to rounding them up or down without the transit stop of five cents.

The departure of the coin — with an echidna on one side the Queen on the other — would not be immediate. It would be phased out as the Mint stopped making them.

While it might be annoyingly cluttering up your purses without being able to buy much unless in cumbersome multiples, it should be given credit for outliving some of its relatives.

The five cent coin has been around roughly twice the lifespan of the one cent and two cent coins, which were taken from us by an announcement in the 1990 Budget.

The death of the five cent coin has long been forecast with Mint chief executive Ross MacDiamid marking its 50th birthday in February by joining the mourners.

“We’ve seen a halving of the demand for five cent pieces over the past five years and our expectation is that it will just simply progress,” Mr MacDiamid said at the time.

“It’s lost its utility; it will lose interest from the public.”

He said coins worldwide were having a tough time.

“We’ve seen a decline in Australia over the next three to four years of about 25 per cent in demand for circulating coin,” he said.

And making the coins is costing more than they are worth.