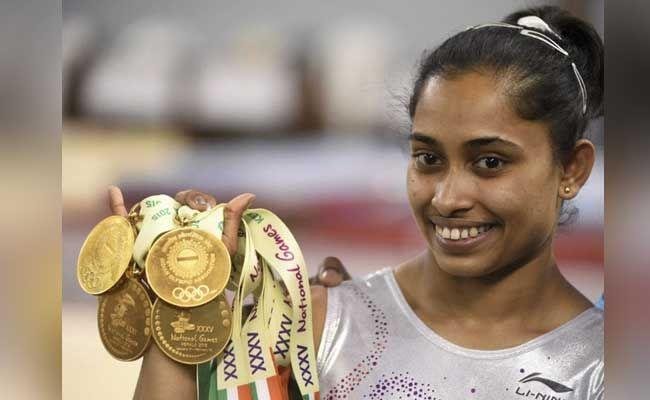 Dipa Karmakar has created history by becoming the first Indian woman gymnast to qualify for the Olympics. She booked her place at the Rio Games after putting up a strong show in the final qualifying and test event in Rio De Janeiro.

Her journey from humble beginnings in her hometown of Agartala is testimony to her hard work and determination. The daughter of a weightlifting coach at the SAI centre in Agartala, Ms Dipa started gymnastics from the early age of six. She is trained by coach Bisbeshwar Nandi.

But Ms Dipa’s tryst with gymnastics was not a case of love at first sight. She did not enter the sport by choice, but was initiated into it by her father. In fact, MS Dipa’s fear of falling coupled with her flat feet made her intial days in the sport quite tough.

Ms Dipa’s flat feet used to affect the spring in her jump and Mr Nandi had to work hard to bring the arch in her feet. With time, she also managed to overcome her fear of falling and started to improve quite rapidly.

Ms Dipa won the Junior Nationals at Jalpaiguri in 2007, which increased her interest and passion for the sport. The 22-year-old first came into the limelight in 2011, when she bagged five gold medals in the National Games, representing Tripura. She won the golds in floor, vault, all-around, balance beam and uneven bars.

In 2010, she was part of the Indian gymnastic team in the Commonwealth Games held in Delhi, where she saw Ashish Kumar create history by winning India’s first ever gymnastic medal. Dipa later said Mr Kumar was an inspiration for her.

Four years later in the 2014 Commonwealth Games (CWG), Ms Dipa grabbed the bronze medal in the women’s vault final. She received an overall score of 14.366. The medal made her the first Indian woman to win in a Commonwealth Games gymnastic event.

Ms Dipa attempted the Produnova vault — a move that consists of a front handspring and two front somersaults — which is one of the most difficult and dangerous moves in gymnastics. However, Ms Dipa’s attempt did not come off clean as her bottom touched the mat before she bounced back onto her feet, which earned her a penalty of 0.1 point.

But Ms Dipa earned the distinction of being the highest scorer in the world to have accomplished the move. Among the contemporary gymnasts, only Yamilet Pena of Dominican Republic and Fadwa Mahmoud of Egypt have attempted the Produnova vault and neither managed to score as much as Dipa.

At a felicitation for the CWG athletes on August 8 in New Delhi, Ms Dipa’s efforts were praised by cricket legend Sachin Tendulkar.

Later that year in the Asian Games, Ms Dipa finished fourth in the vault final with a score of 14.200.

In October 2015, the Agartala girl also became the first ever Indian to qualify for the final stage of the 2015 World Artistic Gymnastics Championships. In the final she scored 14.683 to grab the fifth position.