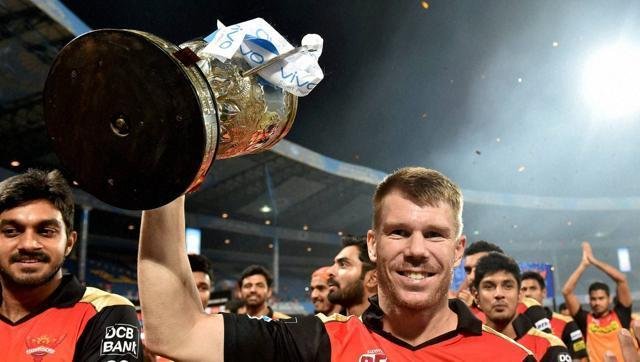 Victorious Sunrisers Hyderabad captain David Warner with all humility hailed Virat Kohli as a “great leader” as he termed it a total “team effort” after beating Royal Challengers Bangalore by 8 runs in the IPL final on Sunday night.

“It was a fantastic team achievement. To lead this side and the support from the players, me pulling my weight with the runs, it has been a hard journey. It’s a team effort. To have the perfect game, we needed to gel. For us, the key was team effort all the way,” Warner said at the post-match presentation ceremony.

Asked about the target, Warner said:”Look we knew, we had to get 200. Virat Kohli, what a great leader! I can’t take it away from him. He set the benchmark this season. We knew we had to win three straight games. To win in Bangalore, we were underdogs. But, we batted well, bowled well and fielded well. In 24 hours, I will be off to the Caribbean. Time to have a beer.”

Set a steep target of 209 to chase, it was left to the Kohli-led batting unit to achieve their biggest target of the season in the biggest game, having lost two finals, in 2009 and 2011.

RCB appeared on course with Chris Gayle getting them off to a flier. Kohli lived up to his reputation and performed on the big stage, scoring his seventh half-century of IPL 9. He became the highest run-getter ever in IPL with 4110 runs.

His dismissal ruled out any more reasons to celebrate as the rest of the batting unit crumbled under the pressure of maintaining a high run-rate. AB De Villiers and Shane Watson tried to push the score, but caved in under pressure.

Sunrisers’ bowlers played their part professionally. Buoyed by the return of the in-form Mustafizur Rahman, they didn’t let go once they had the game in their grip.

RCB took the game to the final over, needing 18 to win, but the hopes of the home fans had receded by then. A few dropped catches added to the tension, but it proved too big an ask in the end.

It had been touted as a contest between Royal Challengers’ batting and Sunrisers Hyderabad’s bowling attack. Quite aptly it came down that as the two sides vied for their maiden title, with RCB holding the edge playing at home. In the end, the Sunrisers bowlers stole Kohli’s thunder.