Confident Fauci Receives Covid-19 Vaccine In ‘Symbol’ For US 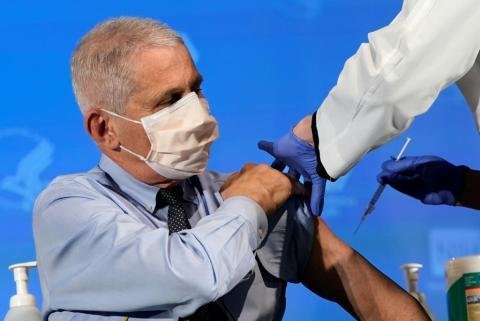 Anthony Fauci, the United States’ top infectious disease specialist, received his Covid-19 vaccine on Tuesday along with other senior officials and six health workers at a live streamed event at the National Institutes of Health (NIH).

The widely-respected scientist rolled up his left shirt sleeve, and said he was taking the shot “as a symbol to the rest of the country that I feel extreme confidence in the safety and the efficacy of this vaccine.

“I want to encourage everyone who has the opportunity to get vaccinated so that we could have a veil of protection over this country, that would end this pandemic,” he added.

He then gave a thumbs-up sign and clapped for his colleagues as he left the stage of an auditorium at the NIH’s headquarters in Bethesda, a Washington suburb.

The 79-year-old, who continues to practice as a physician, was among the first Americans to receive injections developed by Moderna and the NIH’s National Institute of Allergies and Infectious Diseases (NIAID), which he has led since 1984.

“I want the American people to know that I have absolute and complete confidence in the integrity and the independence of the processes used by the FDA (Food and Drug Administration) to approve these vaccines,” said Azar, a political appointee of the Trump administration.

Before them, six health care workers received their shots, many appearing emotional as they explained why they chose to be vaccinated.

“I work directly with Covid patients so I felt I have an opportunity, why not,” said nurse Naomi Richardson.

Widely-respected scientist Anthony Fauci said he took the shot “as a symbol to the rest of the country that I feel extreme confidence in the safety and the efficacy of this vaccine.”
POOL / Patrick Semansky


It comes as a new poll showed Americans’ willingness to take a coronavirus vaccine has jumped since the first two were authorized.

The USA TODAY/Suffolk University Poll, carried out Wednesday through Sunday, showed 46 percent said they were willing to take the vaccine as soon as they can — a significant jump on the 26 percent who answered similarly in late October.

A further 32 percent said they would wait for others to get the shots before they do so themselves.

Twenty percent remain unpersuaded. Experts say 70-75 percent of the population will need to be vaccinated to achieve population immunity.

Earlier, Fauci paid tribute to his colleagues, saying the vaccine “essentially had its origination in the fundamental basic research that’s conducted here at NIH.”

NIAID scientists helped develop the mRNA (messenger ribonucleic acid) technology used in the Moderna vaccine, which gives the human body the genetic instructions it needs to create a surface protein of the coronavirus.

This simulates a natural infection and trains the immune system to be ready for when it encounters the real virus.

Traditional vaccines use weakened or inactivated forms of microbes, and take much longer to develop and scale up.

The US is hoping to immunize 20 million people this month, with long-term care residents and health workers at the front of the line.

On Sunday, an expert committee said that people 75 and older should be the next vaccinated along with 30 million “frontline essential workers,” including teachers, grocery store employees and police.