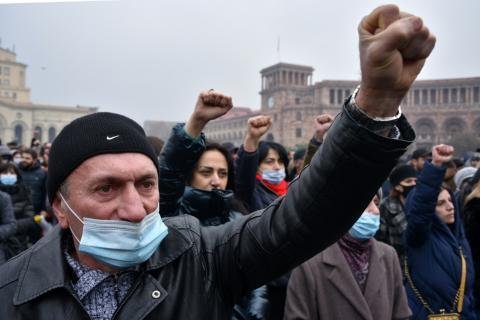 Thousands of protesters rallied in Armenia’s capital on Tuesday demanding Prime Minister Nikol Pashinyan resign over a controversial peace deal with Azerbaijan as the opposition launched a nationwide strike.

Some 25,000 protesters flooded the centre of Yerevan, according to an AFP correspondent at the scene, chanting “Nikol the traitor” and “Armenia without Nikol”.

Demonstrators surrounded the government building and implored riot police protecting it to join the people.

Pashinyan sparked fury when he signed the Moscow-brokered accord last month, ending six weeks of war over the ethnic Armenian enclave of Nagorno-Karabakh that left more than 6,000 dead.

Armenia agreed to cede three districts to Baku under the deal in addition to four others that Azerbaijani forces won back during the fighting and had been controlled by Armenian separatists since a 1990s war.

The decision unleashed outrage in Armenia, where demonstrators have staged near daily rallies demanding Pashinyan’s resignation, with anger growing in recent weeks.

On Tuesday protesters gathered in Yerevan’s Republic Square outside the government building, the prosecutor general’s office and several other ministries, after a call last week by the opposition to begin a nationwide strike at noon.

“This government no longer represents us. Its decisions are illegal and therefore it must go,” a leader of the opposition Dashnaktsutyun party, Ishkhan Sagatelyan, told demonstrators.

“We can heal our wounds only if he leaves,” 67-year-old pensioner Iveta Serobyan told AFP, referring to Pashinyan.

Hundreds of protesters remained in Yerevan’s Republic Square, where they said they would spend the night
AFP / Karen MINASYAN


Dashnaktsutyun leader Gegham Manukyan said employees of the Yerevan city metro had joined the strike as well as the trade union of Yerevan State University and more than a dozen business organisations.

He said the strike would continue until Pashinyan steps down.

At around 8 pm (1600 GMT), hundreds of protesters remained in Republic Square, where they said they would spend the night, an AFP correspondent reported.

The demonstrators set up half a dozen tents for sleeping, made hot drinks and lit fires in several empty oil drums to stay warm against the freezing cold.

Police remained at the scene but did not interfere with the protesters.

The rally came a day after demonstrators blocked roads leading to the border town of Goris, forcing Pashinyan to cut short an official visit as part of three days of national mourning for people killed during the war.

The town’s mayor Arushan Arushanyan had called on protesters to bar Pashinyan from entering the southern Syunik region and was later detained by police.

Pashinyan has said he has no plans to resign, a stance he repeated on Facebook ahead of Tuesday’s rallies, writing: “I will continue to perform my functions of prime minister.”