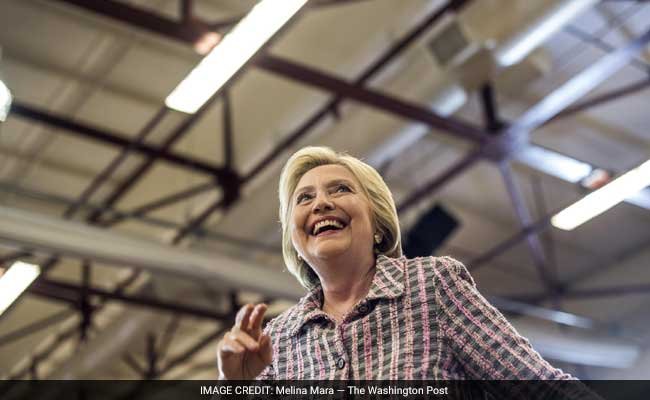 LOS ANGELES:  Hillary Clinton has secured enough delegates to win the Democratic presidential nomination, according to The Associated Press, emerging from a long and bruising primary to become the first woman to lead a major party in the race for the White House.

A bitter presidential contest that Clinton was once expected to win in a walk ended abruptly late Monday, as she claimed exactly the number of delegates needed to secure the nomination in her contest against Sen. Bernie Sanders of Vermont, according the AP’s latest tally.

Clinton was widely expected — even inside her own campaign — to clinch the nomination on Tuesday, when California, New Jersey and four other states are scheduled to vote. But according to the AP, Clinton continued to pick up newly committed delegates over the weekend and on Monday that effectively guarantee her the nomination.

With that milestone, the former first lady, U.S. senator and secretary of state has ended more than two centuries of national history in which only men have been the standard-bearers for the major political parties. She also overcame her own crushing loss in the 2008 Democratic primary against Barack Obama, as well as a political environment this year that favored outsiders at the expense of Clinton’s establishment credentials. And she became the first spouse of a former president to win the presidential nomination in her own right.

“My supporters are passionate, they are committed, they have voted for me in great numbers across the country for many reasons,” Clinton said Monday on the campaign trail in California. “But among the reasons is their belief that having a woman president would make a great statement — a historic statement — about what kind of country we are, what we stand for. It’s really emotional.”

Now, Clinton will turn fully to face Republican Donald Trump in the November general election, a pivot that unofficially began last week with a withering speech on foreign policy in which she shredded Trump’s qualifications and temperament. Those attacks have continued this weekend at appearances up and down California and have been received with unprecedented enthusiasm by her supporters.

Clinton has faced an unexpectedly strong and increasingly contentious challenge from Sanders, and there is the possibility that the senator from Vermont will keep battling Clinton even now that she has effectively sewn up the nomination.

But that won’t stop Clinton from celebrating the milestone on Tuesday, when she had planned to claim the nomination.

Tuesday marks the exact anniversary of the day eight years ago when Clinton conceded the Democratic nomination to then-Sen. Barack Obama. She famously promised then that a woman would someday win the White House. And she took credit for leaving “about 18 million cracks” in the “highest, hardest glass ceiling” of all during her first effort at it.

President Obama could endorse Clinton as soon as this week, not waiting for the Democratic convention in July, White House press secretary Josh Earnest said Monday.

The president will decide for himself when to endorse, but “we may have a better sense of where the race is headed” after Tuesday’s voting, Earnest said.

An Obama endorsement would be a significant boost to Clinton as she seeks to unify Democrats after the difficult primaries. It would send a strong message to Sanders and his supporters that they should coalesce around Clinton, something Sanders has indicated he is far from ready to do.

“We’ll be talking about all of that in the next days, and I look forward to that,” Clinton said when asked what role Obama might play in her campaign. “Obviously, I’m excited about having the president’s support, because I have said throughout this campaign, I was honored to serve in the president’s Cabinet.”

Although Clinton was widely expected to clinch the nomination before the polls close in enormous California, she has been campaigning furiously there in recent days, in part to deny Sanders a victory on a night when she and her campaign want no doubt to remain about her nomination.

The two candidates remained locked in an exceedingly tight contest in California, with several polls within the margin of error. Clinton has been buoyed, however, by a speech last week in San Diego in which she slammed presumptive Republican nominee Donald Trump like never before, calling him temperamentally unfit and ill prepared to assume the presidency.

Although Clinton has increasingly appeared to be campaigning more against Trump than Sanders, the success of her speech – and its reverberations on the campaign trail in California over the weekend – may help her against Sanders on Tuesday, too.

Even Clinton’s most ardent backers say that the speech revealed a new candidate, one who seemed less cautious and more willing to push boundaries.

“Being herself is so appealing,” Hunley added.

At times deadpan and at other times incredulous, Clinton delivered a cutting 35-minute assault on Trump on Thursday that read like a greatest hits of his most controversial comments.

It was a clear sign of how Clinton plans to defeat Trump – and overcome her own weaknesses, which include lingering questions about her judgment and trustworthiness and the fact that a majority of Americans say they don’t like her.

The business mogul has responded with a barrage of attacks on Twitter and in television interviews.

“Crooked Hillary Clinton has not held a news conference in more than 7 months,” Trump tweeted Monday. “Her record is so bad she is unable to answer tough questions!”

On the campaign trail, Clinton has regularly reprised some of her favorite lines from the speech with more than a little glee.

“I didn’t make these comments up, I just repeated the ones he’s made,” Clinton said while campaigning Sunday. “I just read chapter and verse.”

Aside from California and New Jersey, Democrats are holding primaries Tuesday in New Mexico, Montana and South Dakota and caucuses in North Dakota. Republicans are holding primaries in all those states except North Dakota, but their contests are largely moot because Trump has secured the delegate majority he needs to claim the nomination at his party’s convention next month. Now the Democrats’ contests have less meaning, as well.

Sanders plans to take stock of his presidential campaign at his home in Burlington, Vermont, after Tuesday’s primaries.

“Let’s assess where we are after tomorrow before we make statements based on speculation,” Sanders said at a news conference in Emeryville, California, when asked if he is willing to endorse Clinton in the coming weeks.

Clinton picked up more delegates in contests in Puerto Rico and the Virgin Islands over the weekend and leads the senator among both pledged delegates, those earned in voting contests, and “superdelegates,” the party leaders and elected officials who are free to support the candidate of their choice at the national convention.

It was superdelegates that put her over the top to gain the 2,383 needed to secure the nomination, according to the AP.

Sanders has argued that Clinton won’t have a lock because superdelegates don’t actually vote until the convention and could change their minds.

Speaking to reporters at a Hilton Garden Inn in a conference room overlooking the glimmering San Francisco Bay, Sanders insisted that he could still win over some superdelegates in the coming days.

“We are in private conversations,” Sanders said of his efforts to court party leaders and officials. “We’ve seen a little bit of movement,” he added, though he acknowledged that his latest superdelegate pickups number fewer than a half-dozen.

He dismissed the suggestion by a reporter that he could be a “spoiler” if he remains in the race — and he also had a tense exchange separately in which he insisted that his refusal to quit was not “sexist.”

Monday’s news – and Tuesday’s primaries – will factor heavily in the reception Sanders receives in coming weeks as he tries to make the case to superdelegates that he would be a stronger nominee than Clinton.

Sanders is banking on a stellar performance in California, the most populous state in the nation, to bolster his argument that scores of superdelegates should switch allegiance from Clinton to him between now and the Democratic convention in late July.

It’s a strategy that most political observers consider a long shot, to say the least.

Sanders has already effectively ceded New Jersey — the second-biggest prize on Tuesday — to Clinton. Without a sweeping victory in California, he may not have much of a case left to make.