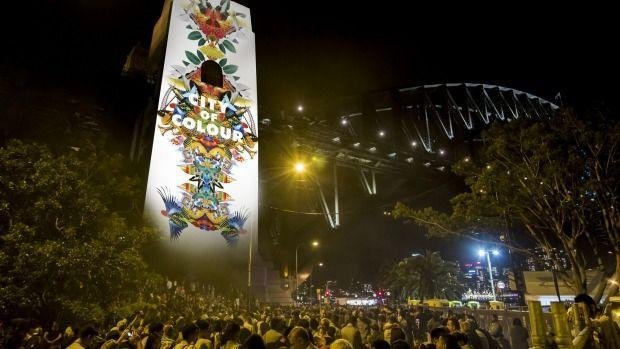 The City of Sydney says the Harbour Bridge will be lit up like never before in this year’s New Year’s Eve fireworks display.

Lord Mayor Clover Moore announced on Monday that the theme for this year’s display would be “city of colour”, a tribute to Sydney’s “vibrance” and “diversity”.

Cr Moore announced that both sides of the harbour bridge’s pylons will be illuminated by fireworks for the first time in this year’s display, which the city says will be the largest ever.

“Sydney has some of the world’s most recognisable architecture and a stunning natural harbour [… and] the world’s most exciting creative talent,” said Cr Moore. “This year we’ve combined all three”.

The bridge itself will serve as the launching point for 2,400 fireworks this year. A total of 100,000 will be set-off through the evening.
- Advertisement -

The bridge fireworks will be designed by Sydney artists Romance Was Born and Province Studios.

Fireworks in the shape of wattles, fig leaves, whales and kangaroos will feature in the 9pm display. Its “flora and fauna” theme will mark the 200th anniversary of the Royal Botanic Gardens and the centenary of Taronga Zoo.

“It’s been our most complicated brief yet,” said Fortunato Foti, the long-time director of the fireworks display.

A record crowd of an about two million people watched the fireworks from the harbour in 2013.

But last year’s crowd was as little as half that number, a drop that some attributed to lingering fears of terrorism in the wake of the Martin Place siege.

A tug boat blasts tonnes of water into the sky across the harbour from The Rocks to Fort Denison.

8.40pm Welcome to Country and first glimpse of the Sydney Harbour Bridge effects and pylon projections

As night falls, one of this year’s most spectacular – and moving – Sydney Harbour Bridge effects will begin: a special Welcome to Country ceremony from Rhoda Roberts.

An eight-minute fireworks spectacular with a specially designed soundtrack for young children. This year’s display features flora and fauna-shaped fireworks as a tribute to the 200th year of the Royal Botanic Gardens and 100 years of Taronga Zoo.

The winning display from this year’s ABC ‘Design Your Own Firework’ competition will also be unveiled.

Up to 50 illuminated vessels parade around the harbour, outlined with white rope lights.

A stunning 12-minute display with fireworks erupting from over and under the Sydney Harbour Bridge, from seven barges in the harbour and from all four western sails of the Sydney Opera House. This year’s celebration features the biggest-ever display on the Harbour Bridge – an additional 2,400 effects – including never-before-seen fireworks.