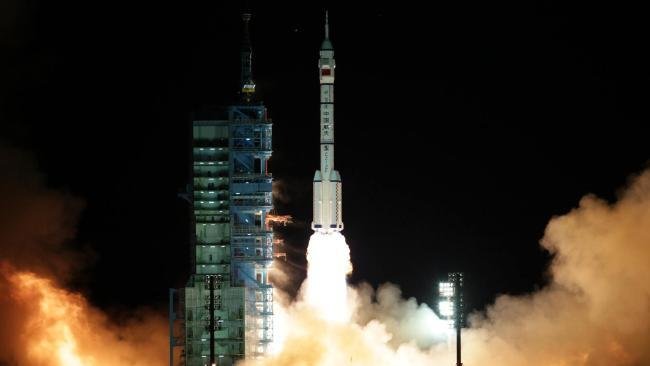 CHINA is on the brink of launching a groundbreaking new satellite capable of conducting quantum experiments in space, leading some to predict it will usher in the beginning of a new space race.

The world will be watching very closely after the Chinese-led satellite launches in August. If it proves successful in carrying out the quantum experiments, China is expected to follow it with many more in a bid to create a super secure network that uses an encryption technique based on the principles of quantum communication.

The reason world powers will be paying such close attention is that quantum-enabled spacecrafts are able to provide communication pathways that are completely unhackable. While the technology has been trialled on the ground over short distances, the capability to do so across the globe would be a huge game changer — it holds the promise of a world with completely secure digital communication.

However with advances in computing, that won’t always be the case.

By employing the laws of quantum physics scientists have been working on a new way of transmitting information so that it is impossible for it to be covertly hacked — and China is about to send it into space.

Professor Ping Koy Lam from the ANU’s Department of Quantum Science says aside from being a potential step towards a quantum internet, China’s satellite project is a “pioneering experiment” that will also tell us more about quantum physics and gravity.

“In physics we are trying, and we have demonstrated some encryption techniques that rely on the law of physics rather than the mathematical complexity and we call this quantum key distribution,” he told news.com.au.

“For that to work you need to send laser beams that carry certain information, quantum information, and then you need the senders and the receivers to get together to find a protocol to secure the communication,” he said.

In the case of the 600kg Chinese satellite, a crystal at the centre of the spacecraft will produce pairs of entangled photons. The entangled protons can be thought of as a laser beam as the properties of the photons remain entwined however far apart they are separated.

Once in orbit the satellite will send the partners of the entangled photons to bases in Beijing and Vienna (Austria is a partner in the launch) in order to create a secret key used to access the information carried in the transmission.

The reason a quantum network is impervious to external intrusion is that it’s impossible to conceal any outside tinkering with the transmission. Basically the information carried in the quantum state of a particle cannot be measured or cloned without destroying the information itself.

According to physicist Chaoyang Lu who works on the project, if the satellite proves successful once in orbit, China will send more.

“If the first satellite goes well, China will definitely launch more,” he told the journalNature, adding that the government would need about 20 satellites to enable a globally secure communication network.

Cyber security and encryption has become a major issue for world governments with cyber warfare emerging as the new battleground for interstate conflict. Even the less malicious examples such as the hack and subsequent release last week of private correspondence between members of America’s Democratic Party believed to be carried out by Russia can have major implications for global politics.

Lu, who works at the University of Science and Technology of China in Hefei, predicts the launch of China’s satellites will usher in a new space race.

“Definitely, I think there will be a race,” he said.

Currently such experiments have been conducted on the ground. But sending photons (again, think of them as laser beams or light waves) through the air or via fibre optic cables has its limitations because they get scattered or absorbed. It’s why amplifying a signal while preserving its fragile quantum state is so tricky.

“We can show that this kind of quantum encryption works in a city radius or at most between two nearby cities,” Prof Lam said.

However China believes the atmosphere in space will allow the photons to travel further without disruption because “in space there’s nothing to attenuate light.”

Theoretically, after the first few kilometres of the atmosphere, the photon laser beams should enjoy smooth sailing.

By having a number of satellites in space, the craft can act as intermediaries between ground stations. If you have the necessary stations on the ground you could conceivably create a global blanket of secure encryption, or, a “quantum internet” as it’s being called.

While China’s plan is arguably the most ambitious, there is plenty of countries working towards the same goal.

Universities in the UK and Singapore have teamed up and are using inexpensive 5kg satellites known as cubesats to do quantum experiments in space. Next year they hope to launch a craft which can produce fully entangled pairs of photons.

Canadian researchers are planning on generating entangled photons on the ground and then beaming them to a satellite in space.

The European Space Agency and Japan are also looking to extrapolate the technology into the cosmos while NASA is leading a future quantum experiment aboard the International Space Station.

For corporations seeking to secure their information the ramifications of a quantum communication via orbiting satellites could prove massive.

But the advent of satellite-driven global quantum communication will be a true game changer for governments around the world, and their space agencies.