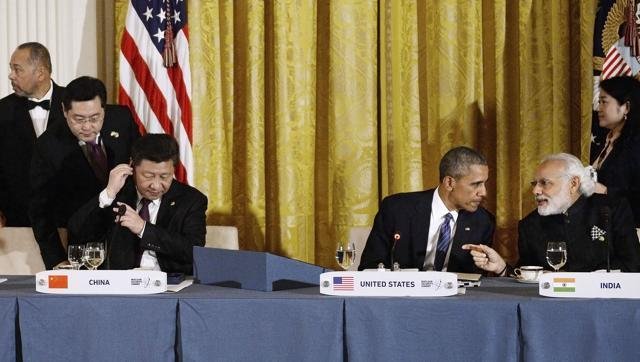 India’s entry into an elite club controlling nuclear technology is not on the agenda of the group’s meeting this week, China said on Monday, but diplomats from the bloc’s other member-states insisted New Delhi’s candidature will be taken up.

China has stonewalled India’s membership of the 48-member Nuclear Suppliers Group (NSG) on the grounds that it is not a signatory to the Nuclear Non-Proliferation Treaty (NPT). The group, set up in response to India’s first nuclear test in 1974, aims to prevent the proliferation of atomic weapons.

Ahead of the NSG’s annual plenary meet in Seoul on June 23-24, Chinese foreign ministry spokesperson Hua Chunying said India’s application to join the group was not on the agenda.

“I want to point out the NSG agenda has never covered any issue concerning non-NPT countries joining the NSG. As we understand the annual conference in Seoul this year also has no such kind of issue or topic,” Hua told a regular news briefing.

The opinion of member countries is divided not only about India’s inclusion but also on the entry of all non-NPT members, she said.

Differences in the bloc

But diplomats from other NSG member countries differed with the Chinese perspective, saying their understanding was the issue of new members will be taken up on the final day of the two-day meet.

The NSG, being an informal body, has no fixed agenda and issues taken up at meetings depend on the views of members. New Delhi hopes several countries will raise the question of its membership and force China to take a stand, the diplomats said.

The US on Monday said it continues to call member nations to back India’s membership, further indicating that New Delhi’s application is, contrary to the Chinese assertion, on the agenda.

“We continue to call on the participating governments of the NSG to support India’s application at the plenary session this week in Seoul,” US state department spokesman John Kirby said.

South Korea, which currently holds the NSG chairmanship, is expected back India.

China adopted a similar position when India secured a US-backed exemption from NSG sanctions in 2008 as part of the landmark nuclear deal between the two countries. Even then, Beijing had declared the Indian exemption was not on the agenda, but the US had raised the issue and Germany, the then chairman, had accepted it for discussion.

India has ramped up efforts to win backing for its NSG bid, reaching out to key world capitals such as Washington and London and sending foreign secretary S Jaishankar on a low-key visit to Beijing last week to lobby for its inclusion.

China’s categorical statement came just a day after external affairs minister Sushma Swaraj said Beijing was not against New Delhi’s inclusion but was talking “only about the criteria and procedures”.

Read | China not protesting our NSG bid, only talking of procedure: Swaraj

Hua told the news briefing India’s bid is not in a “matured” stage, and needs consensus and detailed discussions among NSG members because New Delhi still has not signed the NPT, the “cornerstone” pact against the spread of nuclear weapons.

The NSG works on the principle of consensus and a single hold-out country can spoil India’s chance to be part of the grouping.

Beijing’s stance might make a meeting between Prime Minister Narendra Modi and President Xi Jinping on the margins of the Shanghai Cooperation Organisation (SCO) summit in Tashkent on June 23 awkward.

After Monday’s statement, it is also unlikely Modi and Xi will be able to work out a last minute deal before the NSG plenary ends on June 24.

India has argued that joining the NSG will give it access to technology needed for clean energy. China has spearheaded the campaign to prevent India’s inclusion while saying that its “all weather ally” Pakistan should be treated at par with India.

Pakistan and Namibia too have applied to join the NSG.