Can’t Help You, He Was Told After Wife Died. He Carried Her For 6 Hours. 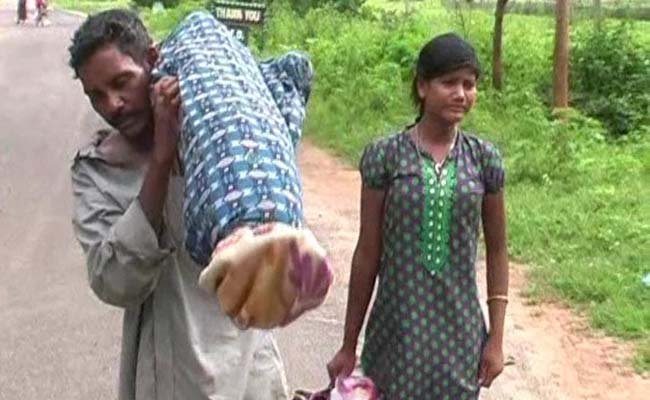 BHUBANESWAR:  His 42-year-old wife’s dead body slung over his shoulder, his little girl by his side, the man kept walking. It was a steaming afternoon in Kalahandi, one of Odisha’s most backward districts.

For six hours, the family made its painful journey, seeped in grief.

The images trigger a visceral reaction – a mix of anger, shame and incredible pain for a family left so thoroughly to fend for itself.

“My wife died at around 12.30 in the night. I requested the hospital to make arrangements for me to take her body back to our village. But they refused. I pleaded with them saying that I won’t be able to pay for any transport. When they refused, I carried her body on my shoulders,” said Dana Majhi, who is in his 50s and works as a daily-wage labourer.

His wife, Amang Dei, died of tuberculosis. His 12-year-old daughter broke down as he explained that journalists he encountered came to his rescue and summoned an ambulance, while filming him to record the government’s wrongdoing, and to demand an answer.

Officials said that there was confusion about whether the state-run hospital that Mr Majhi had left is covered by a rule that makes it necessary for hearses to be provided to the poor. Odisha is supposed to have 40 hearse vans at 37 government hospitals across the state. In Kalahandi, there is one hearse allotted for 25 lakh people.

Mr Majhi said that he was told he had to fill out forms that would then be reviewed by a senior administrator who would decide whether to release money for a private vehicle or ambulance to transport his wife’s body home. For a poor and uneducated man, confronting the loss of his wife, writing an application was a formidable challenge. He walked.