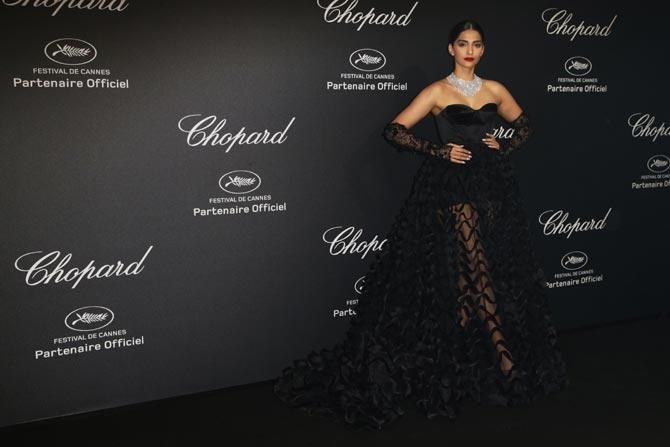 After sporting subtle shades on the red carpet, Bollywood actress Sonam Kapoor donned a glamorous avatar at the Chopard party at Cannes Film Fetival 2016 with a black strapless gown.

The actress turned up at the party on Monday in a Ralph and Russo gown. The ruffles added a vintage and gothic vibe to the ensemble.

Sonam, who is representing the cosmetic brand L’Oreal Pari at the ongoing film fest, is earning kudos for her fashion statements at the red carpet. From her white caped floor-sweeping gown, elegant champagne silk gown to a casual black dress, the ‘Khoobsurat’ actress has been living up the fashionista tag and turning head on the red carpet in French Riviera.

The Cannes Film Festival started on Wednesday and will go on till May 22. The actress, who completed six years of going to the festival in 2016, will also attend amfAR Gala on Thursday.