What Brexit means for consumers 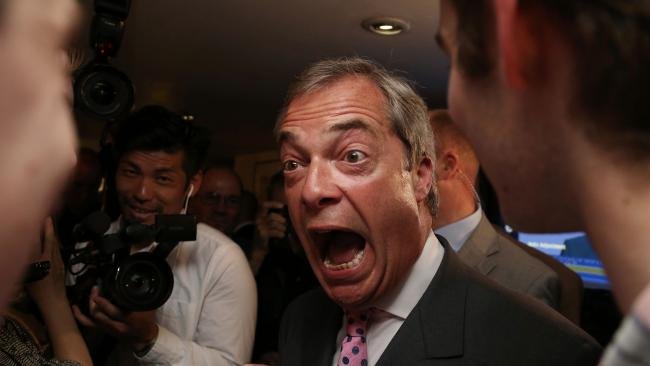 WELL, it actually happened.
Currency and financial markets are in meltdown, birds are falling out of the sky, dogs are walking on their hind legs.
Now that Britain has voted to leave the European Union, what does that mean for Australians?
WHAT IT MEANS FOR CONSUMERS
The good news is that travelling and buying stuff from the UK is about to get a whole lot cheaper. The British pound has had its worst day in history, plunging to a 31-year low.
The bad news is that an extra visa may be required for Australians if the UK separated from the EU.
“Traditionally if you’ve come in through Britain you get automatic entrance to all the EU countries, and the same is true if you land in France and then visit the UK,” University of Technology, Sydney, tourism lecturer David Beirman said.
“All that will mean is you’ll have a special stamp for coming into the UK and another stamp for EU countries.”
DOLLAR IN THE DOLDRUMS

Meanwhile, the Aussie is plunging against the US dollar. The Aussie was at an eight-week high of 76.37 US cents early on Friday, but had plummeted to 73.52 US cents by 1pm AEST.
The British pound has taken an even heavier beating, falling 9 per cent to $US1.35 — its biggest daily fall on record. The Aussie has soared against the Sterling, from 50.82 pence at 0800 AEST to 54.02 pence at 1300 AEST.
IG Markets analyst Angus Nicholson told news.com.au the Aussie dollar would likely continue to sell off reasonably sharply — which could force the Reserve Bank to cut interest rates two more times.
“The concern is that this is going to develop into a much more serious global recession which could crimp global demand,” he said.
“For Australia, a lot of our products are used in the industrial and manufacturing sector globally. That’s a big concern for us.”

On the collapse of the British pound, he said it was “difficult to know what it’s going to mean” due to the unprecedented nature of the sell-off.

“It’s difficult to foresee the pace of the sell-off continuing over the coming days, but the biggest concern is no one knows how Brexit will play out,” he said.

“It could be a long drawn-out process, and the problem is there are so many different snags along the way, any one of those could prompt a further sell-off.”

However, he said the impact of Britain leaving the EU on travel and tourism would be minimal, despite predictions by the Bank of England it could plunge the UK into recession.

Mr James said the UK Government might need to come up with short-term fiscal measures such as a mini-budget to prevent a downturn of the economy.

“Investors despise uncertainty and that has already been plain in terms of the increased volatility,” he said.

“No country has ever left — or sought to leave — the European Union in its current form. So most analysts have no alternative but to say that is hard to predict what would actually happen if the UK decides to exit the EU.”

SHOULD AUSTRALIANS BE WORRIED?

According to Scott Morrison, not so much. The Treasurer has called for cool heads to prevail, saying he has been briefed by Treasury on the medium and long-term impacts of a Brexit.

“The advice that we have is that Australia’s exposure in these circumstances is very limited,” Mr Morrison told reporters in Sydney on Friday.

Investors didn’t get the message, with a cataclysmic sell-off wiping more than $70 billion off the Australian stock market in a matter of hours.

“Our financial markets, not just stocks but also the dollar and bond markets, are forward scouts for this particular event,” Patersons Securities’ economist and market strategist Tony Farnham told AFP.

“So our markets are reacting to the ebb and flow on whether you believe they are going to ‘leave’ or ‘remain’ in the EU. International markets would be showing concern about the uncertain economic ramifications were the UK to vote to leave the EU.”

All market sectors across the S&P/ASX 200 were weaker, with mining stocks making up the bulk of the top 10 losers about noon.

“Anyone that has got a bit of gold … gold is a bit of a safe haven,” Morgans’ stockbroking client adviser Steve Greentree told AFP.

“[There are a] few little pockets of resistance but predominantly it is coming off. But anyone that’s got a bit of US dollar exposure or North American exposure might outperform a little bit.”

Mr Morrison said despite financial market volatility over the Brexit vote, the way in which Britons vote “doesn’t change anything that the Australian government has to do” in terms of the nation’s economic plans.

“Undoubtedly there is volatility in markets and currencies that sit around these events. But that is not necessarily determinative of long-term volatility,” he said.

“The implications for Australia are minimal, potentially. But there are other decisions that may flow from this [from] which will arise different challenges.”