Beijing Says It Does Not Accept Verdict On South China Sea 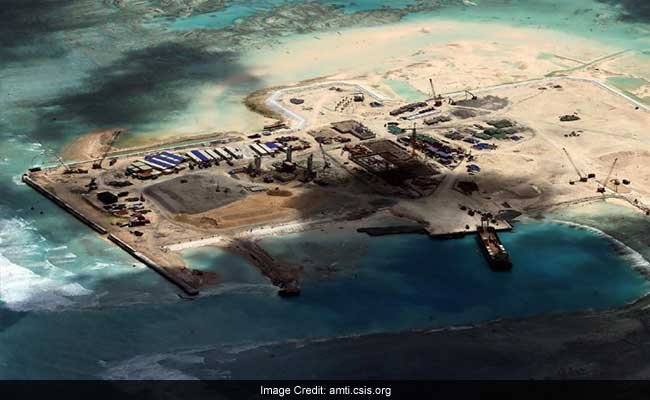 China’s territorial assertions to more than 80 per cent of the South China Sea have been rebuffed by an international tribunal that ruled it has no historic rights to the resources within the waters, a verdict that went beyond what many analysts had expected.

“There was no evidence that China has historically exercised exclusive control over the waters or their resources,” the Permanent Court of Arbitration in The Hague said Tuesday in a statement. “The tribunal concluded that there was no legal basis for China to claim historic rights to resources within the seas falling within the ‘nine-dash line’.”

The case was brought by the Philippines, arguing that China’s claims don’t comply with the United Nations Convention on the Law of the Sea. While the court says the ruling is binding, it lacks a mechanism for enforcement.

China’s assertions are based on a 1947 map showing vague dashes – known as the nine-dash line – looping about 1,120 miles (1,800 kilometres) south of China’s Hainan Island. It boycotted the arbitration process and vowed to ignore the result.

The ruling risks inflaming tensions in a waterway that hosts about $5 trillion of trade a year and is a link for global energy shipments. China has stepped up its assertions under President Xi Jinping, straining ties with nations including Vietnam. The spat more broadly reflects a tussle for strategic influence in the western Pacific between the U.S., which has dominated the region since World War II, and a rising China.

Many of the court’s findings concerned the rights to territorial seas generated by various features. China has reclaimed some 3,200 acres (1,290 hectares) of land and built ports, lighthouses and runways. Under UNCLOS, man-made islands don’t generate maritime entitlements.

“This is a severe blow for China — it drives a legal coach and horses through China’s position that it has historical rights within the nine-dash line,” said Euan Graham, director of the international security program at the Lowy Institute for International Policy in Sydney. The key is now China’s reaction and whether it takes a strong response that includes withdrawing from UNCLOS.

China said it neither accepted nor acknowledged the ruling and reaffirmed its view the proceedings went against international law. “The award is null and void and has no binding force,” the Ministry of Foreign Affairs said in a statement published by the official Xinhua News Agency.

China conducted test flights Tuesday at airstrips on newly reclaimed land at Mischief and Subi reefs, Xinhua said, confirming the facilities had been completed. The trial shows the sites can handle civilian flights safely, it said.

“Chinese armed forces will firmly safeguard national sovereignty, security and maritime interests and rights, firmly uphold regional peace and stability, and deal with all kinds of threats and challenges,” the defense ministry said on its website before the ruling was announced.

Philippine Foreign Secretary Perfecto Yasay told reporters in Manila the country was studying the ruling and called for restraint. “The Philippines strongly affirms its respect for this milestone decision as an important contribution to ongoing efforts in addressing disputes in South China Sea,” Yasay said.

The court found that:

– Johnson Reef, Cuarteron Reef and Fiery Cross Reef, on which China has completed a 3 kilometer airstrip, are high-tide features that generate a territorial sea, but not an EEZ

The court found that China caused “severe harm” to the environment with its island-building and that it had breached UNCLOS regulations on preventing collisions as sea when its law enforcement vessels harassed Philippine vessels around Scarborough Shoal.

The Philippines brought the case to the court after China’s coast guard seized the Scarborough Shoal in 2012. Beijing declined to submit formal documentation in defense of its claims, though it filed a position paper in December 2014 arguing the Philippine submission was a sovereignty dispute and outside the court’s jurisdiction. The PCA rejected that argument.

While the U.S. doesn’t take a position on the claims, it worked diplomatic channels to garner support for the court’s jurisdiction ahead of the ruling.

“It is our expectation that both parties will comply with their obligations and exercise restraint,” the U.S. government said in statement. While the U.S. said it wouldn’t comment on the merits of the case, the government considered the ruling legally binding on both China and the Philippines.

The U.S. insists it has the right to protect freedom of navigation in the waters and has carried out voyages and flights near features claimed by China. In May, China sent fighters and warships to warn the USS William P. Lawrence, a guided missile destroyer, when it sailed close to one of its outposts in the Spratly Islands.

Japanese Foreign Minister Fumio Kishida urged all parties to comply with the ruling. Japan has “consistently advocated the importance of the rule of law and the use of peaceful means, not the use of force or coercion” in settling maritime disputes, he said in a statement. Japan has its own territorial dispute with China in the East China Sea.