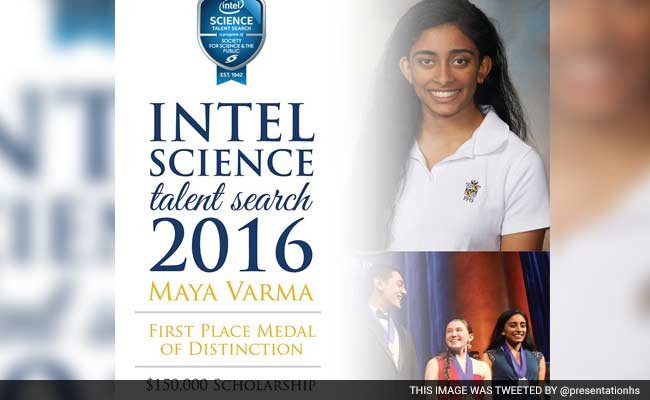 WASHINGTON:  US President Barack Obama has profusely praised two Indian-American science whiz kids for their innovative ideas and path breaking thinking, which he said would help serve the global community.

“All of you are showing the rest of us that it’s never too early in life to make a difference,” President Obama said in his remarks after interacting with the students who had come from across the country.

“You teach us about the power of reason and logic, and trying things and figuring out whether they work, and if they don’t, learning from that and trying something new. And you remind us that, together, through science, we can tackle some of the biggest challenges that we face,” said the US President as he singled several of these whiz kids two of them were Indian-American.

“We’ve got Maya Varma, who is a senior from San Jose, California,” 54-year-old President Obama said.

Maya’s (literally) breathtaking invention earned her a slot as a 2016 Intel STS finalist, where her spirometer was selected as one of the top 40 projects in the nation.

“Maya is using a low-cost microcontroller, software freely available on the Internet, and a smartphone, and she designed a tool that allows people with asthma and other lung diseases to diagnose and monitor their own symptoms,” he said.

“My aspiration is not only to create the next big thing in my field one day, but also to make it accessible to more than a privileged few in the world,” President Obama quoted Maya as saying and asked the audience to her a big round of applause.

“So when Anarudh was little, his grandparents walked him 10 miles to a remote clinic in his native India for vaccinations, only to find out that the vaccines had spoiled in the heat,” he told the audience.

“Though he eventually got the shots that he needed, he thought, well, this is a problem, and wanted to prevent other children from facing the same risk.

“So he developed what he calls the VAXXWAGON, and it’s a refrigerator on wheels that transports vaccines to remote destinations. That’s the kind of innovation and compassion that we’re seeing from so many of these young people,” President Obama said.

Anarudh’s project made him a finalist in the 2015 Google Science Fair.

President Obama also had a presentation from Sanjana Rane, 18, from Kentucky, who helped discover how a particular protein could be used to detect and treat renal fibrosis.

“This is just a small sample of the incredible talent that is on display at this science fair. We couldn’t be prouder. To all the students, to all the young people, we could not be prouder of you,” President Obama said.