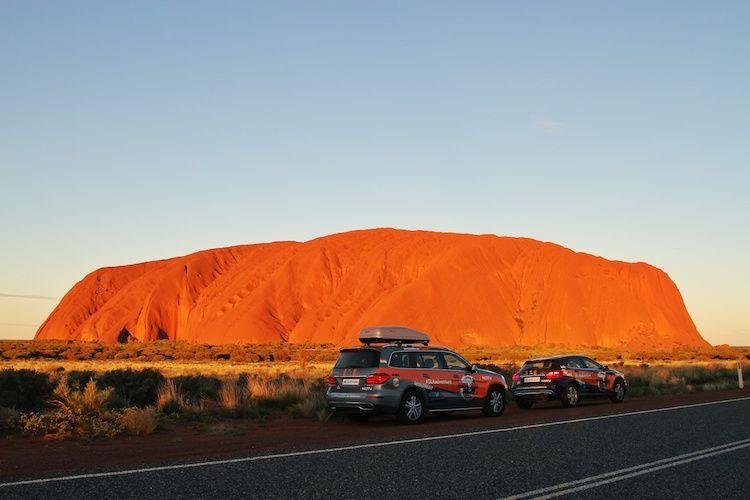 By -Vish Viswanathan
“We have made new friends. The Australian people are very warm “said Siddharth Vinayak Patankar and Sirish Chandran the two automotive journalists who were travelling in Australia in May in two made-in-India Mercedes-Benz GLA cars as part of their round the world journey of epic proportions! NDTV Prime is producing a journalistic TV show on circumnavigation of the globe named ‘Great Overland Adventure’.  The Great Land Adventure (GLA) began with the production of a brand new GLA 200 CDI on the production line at Chakan near Pune at Mercedes-Benz India’s production facility. India is the first market in the world to start CKD assembly of the GLA.  The GLA journey kicked off in July 2015 from the Mercedes-Benz India plant.

The automotive journalists Siddharth and Sirish were travelling in two cars across six continents via 27 countries and filming the journey along the way. They were capturing the world’s unique roads, highways, culture and iconic places across the globe. After completing their travel to Europe, Africa and North America, Central America the team landed in Brisbane during early May.

Siddharth is the Editor – Auto & Head of Automobile Programming at NDTV. He is the Director at World Car Awards and Member of Steering Committee. He is associated with popular motor shows on the NDTV network.  Sirish Chandran is the Editor – evo India Magazine and Editorial Director at Project GTO Publishing. He is a founding member of the Indian Car of the Year, founding chairman of Indian Motorcycle of the Year and has served on the jury of the Overdrive Awards for ten years.

Speaking exclusively to the INDIAN TELEGRAPH, during their stopover in Sydney, the NDTV GLA team were in great spirits. “Good quality roads, good weather and a great landscape throughout our journey has made the Australian journey very memorable “said Siddharth. “The fact that all the Australian cities in general were along water, the journey was fascinating” said Sirish Chandran. Apart from big cities “the journeys to Uluru and Barossa Valley were particularly beautiful” said the NDTV GLA production team manager Shinu Ramachandran.