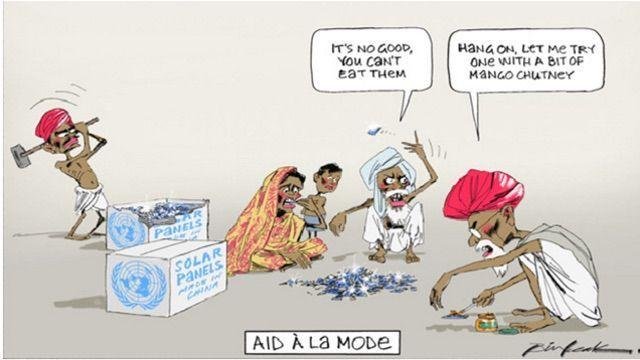 A cartoon in Australia’s biggest-selling national newspaper The Australian created controversy on Monday with its depiction of starving, turbaned Indians attempting to eat solar panels with mango chutney, only to give up in exasperation. This is the latest controversy from veteran cartoonist Bill Leak, who drew it in response to the climate deal reached in Paris on Saturday night, and India’s leading role in ratifying the treaty.

The cartoon has drawn widespread condemnation across social media, with many slamming the imagery as being outright racist and drawing from antiquated stereotypes of the Third World.

Amanda Wise, an associate professor of Sociology at Sydney’s Macquarie University, in an interview with the Guardian Australia, said that the cartoon was “appalling” and would have never been accepted by a publication in the UK, US or Canada.

The irony in Leak’s cartoon was also evident to some on Twitter, given how it shows Indians as only seeing solar panels as potential food, rather than as sources of energy.

“India is the technology centre of the world right now, and has some of the most high-tech industries on the planet in that part of the world,” Wise added. “The underlying message is that people in developing countries don’t need all these technologies to do with climate change – they need food,” she said.

This is not the first time that Leak has been accused of being racist; the cartoonist for the News Corp-owned publication has courted controversy for his cartoons on the Gaza Strip and the Syrian Civil War, with even a Twitter handle, named Bill Leak Explained (@BLeakEksplayned) dedicated to outing the offensive subtext to his work on the social media platform.

Indians currently make up the second-largest migrant group in Australia.

Prime minister Narendra Modi had driven a hardline at the opening day of Paris climate summit, insisting that developed nations had to pay for their historical carbon emissions, and any deal ignoring it would be “morally wrong.” India had also committed to a simultaneous massive use of coal to power growth over the next few decades while increasing its use of renewable energy sources.

Leak’s cartoon, focusing on a stereotype of Indian poverty straight out of the 1950s, might leave him red-faced given the increasing adoption of solar panels in Indian villages. It’s plausible that the emaciated, rag-clad villagers from his cartoon would be able to teach Leak a thing or two about solar energy.

At the very least, they could introduce him to the innumerable pleasures of mango chutney.