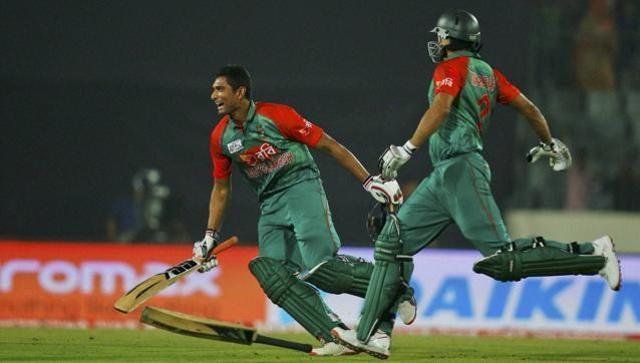 Ahead of Bangladesh’s crucial clash against Pakistan on Wednesday, the ground staff at the Sher-e-Bangla Stadium prepared a wicket that didn’t have much grass. With Pakistan packing four seamers, led by Mohammad Amir, it seemed a ploy to negate the visitors’ advantage.

The surface seemed to have done what it was intended to as Amir went wicketless in his first spell. Chasing the target of 130, Bangladesh’s top-order made most of that with Soumya Sarkar leading with a fighting 48.

Amir though could not be kept down for long. He returned for his second spell to take two wickets, including that of Sarkar and Shakib Al Hasan (8) to leave Bangladesh needing 26 off 16 deliveries with five wickets in hand.

In the end, they smashed 15 runs off the penultimate over by Mohammad Sami to get home, sealing a five-wicket win and a final against India on Sunday.

However, that was preceded by the dismissal of Shakib, who was upset after being bowled attempting a scoop, smashed the stumps with the bat. The passage of play saw Bangladesh, cruising along, suddenly dip.

Bangladesh’s lower order though kept its cool as the game went into the final over with Mahmadullah (13) and skipper Mashrafe Mortaza (12) taking them over the line.

A fiery spell by pacer Al-Amin Hossain (3/25) saw Pakistan’s top-order crumble after the visitors won the toss and elected to bat. If not for the fightback by Shoaib Malik (41) and Sarfaraz Ahmed (58), Pakistan would have struggled to even reach 100, after they were reeling at 28 for four. The duo added 70 runs.

Pakistani hopes were pinned on Amir, but Bangladesh were not going to get bogged down.