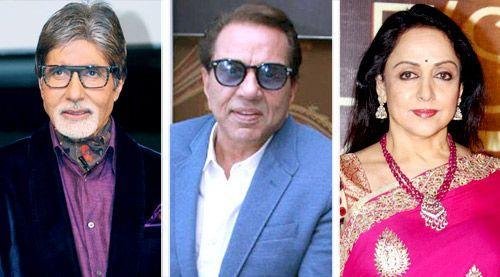 The megastar Amitabh Bachcan is coming in support of his co-actor Hema Malini who is all set to launch her first music album and also encouraging her in this new venture will be her husband and veteran star Dharmendra. The Sholay actors are coming together on Valentine’s Day to unveil the Hindi song ‘Aji Suniye To Zara’ sung by Hema Malini and singer turned politician Babul Supriyo.

The youthful number that was shot in Goa also features Hema Malini as a ‘Dreamgirl’ whom the young guys turn to for dating advice. The video also stars TV actors Vipul Roy, Mishal Raheja and Aishwarya Sakuja along with Babul Supriyo. The veteran actress also expressed her desire to work with Amitabh and her husband Dharamji on the musical front wherein she wants to sing a duet with ‘Amitji’ (as she fondly addresses Amitabh Bachchan) which will be penned by her husband and popular actor Dharmendra.