Abbott meets Obama and spy chief in US 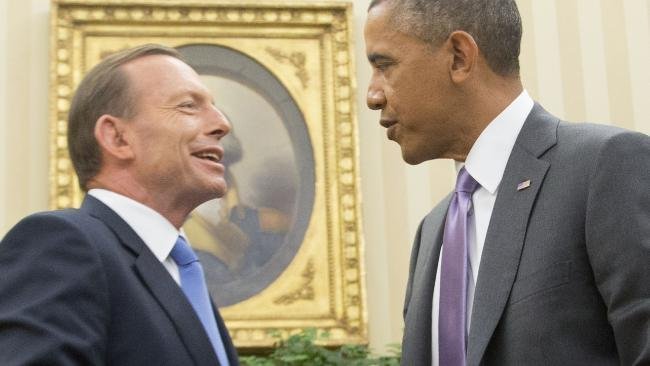 TONY Abbott privately met Barack Obama at an exclusive banquet in Washington on a US trip already mired in controversy.

The former prime minister also held secret talks with the president’s spy chief, The Daily Telegraph reported, and was urged to maintain a global voice on critical issues such as terrorism.

Mr Abbott and Mr Obama had a warm, intimate chat on Saturday night, sources said, showing the ex-PM is by no means ready to let go of his powerful connections.

He also met with Senator John McCain, who described him on Twitter as a “great leader & strong supporter of the US-Australia alliance”.

The day before, Mr Abbott reportedly held secret talks with the US director of National Intelligence James Clapper, where it’s believed they discussed the fight against Islamic State as well as other global threats.

Mr Abbott met a series of political heavyweights during his trip to the US, telling the Daily Telegraph Australia’s contribution to world affairs, especially in the Middle East, was highly valued by the nation.

Mr Abbott has already caused controversy with this trip with his plans to address an anti-gay group in the US. The former Liberal leader revealed he intended to speak at a function in New York run by the Alliance Defending Freedom, a conservative Christian lobby group that opposes homosexuality and abortion.

Mr Turnbull told The Project that Mr Abbott was entitled to speak to such audiences. “He does have fairly a conservative position on issues like that, so he probably would find he’s talking to people with similar views, perhaps,” said the Prime Minister.

But Opposition Leader Bill Shorten expressed concern over Mr Abbott’s behaviour, asking: “The real problem is who’s pulling the strings in the Liberal Party? I am greatly concerned that Malcolm Turnbull may be the presentable frontman of the Liberal Party, but the people pulling the strings, their views are identical to Tony Abbott’s and that’s not good for Australia’s future.”

Last year, Mr Abbott sparked controversy with his Margaret Thatcher lecture in the UK, when he encouraged European leaders to follow in Australia’s footsteps and turn back asylum seeker boats.