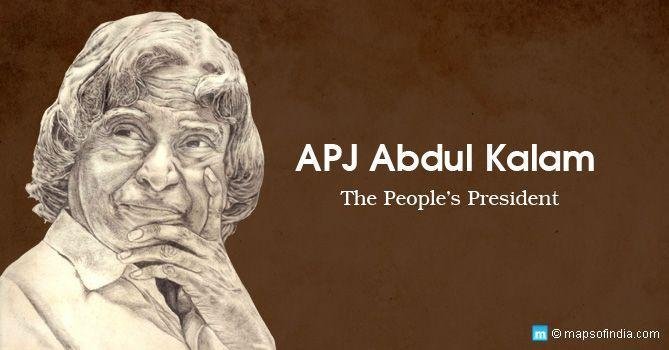 A tribute to the man who motivated millions and whose talent helped make India a proud, strong nation

Dr Avul Pakir Jainulabdeen (APJ) Abdul Kalam, one of India’s most prolific and respected personalities, passed away on July 27, following a massive cardiac arrest. The 83 year old former President collapsed during a lecture at the Indian Institute of Management (IIM) in Shillong.

Dr Kalam won national and international respect and admiration not just as a scientist for his immense contribution to the fields of science and technology and for his tenure as the President of India, but because he was a person with a high level of personal integrity, honesty and moral standards, recognisable merits that set him apart from the crowd.

Like many success stories, Dr Kalam’s beginnings were humble, he even sold newspapers to contribute to the family’s meagre resources; but the unique feature to his story is that humility is what continued to distinguish his personality, even when holding the reins of power in India as its President.

Much has been said about Dr Kalam’s life and times, of his achievements and vision that undoubtedly put India firmly on the path to progress. But it is the snippets which paint a vivid portrait of a sincere, compassionate, motivational and truly unique human being, whose simplicity was one of his most endearing qualities.

Dr Kalam was born on October 15, 1931 and raised in Rameswaram in Tamil Nadu, and despite their limited resources, his parents encouraged him to further his education. After graduating from Madras Institute of Technology in 1960, Dr Kalam joined the Defense Research and Development Organization (DRDO), designing helicopters for the Indian Army. He came into his own after being transferred to the Indian Space Research Organization (ISRO), where he worked as the project director for SLV-III, India’s first indigenous satellite launch vehicle, that successfully launched the satellite Rohini into orbit on July 1980 and propelled India into the position of a significant player in space technology.

making India a major military power after the successful launches of Agni and Prithvi.

As Principal Scientific Advisor to the Government of India in the rank of Cabinet Minister from November 1999 to November 2001, Dr Kalam was reluctantly nudged into the confused echelons of Indian politics, but he never compromised his integrity, no matter what the temptations may have been. Instead, he piloted the India Millennium Mission 2020, and continued his mission to educate and improve the lives of his billion compatriots.

Elected the 11th President of India from 2002 to 2007 and widely considered as the post’s most popular candidate to date, Dr Kalam was voted unanimously by all political parties, in what was a highly unusual level of unity for Indian parliamentarians. In his role as President, Dr Kalam made a resounding impression through stirring speeches at the UN and European Parliament, considered as the best ever delivered. His focus and optimism were as impactful at home, as with the international audience he addressed.

“My message, especially to young people is to have courage to think differently, courage to invent, to travel the unexplored path, courage to discover the impossible and to conquer the problems and succeed. These are great qualities that they must work towards. This is my message to the young people,” stated Dr Kalam, reinforcing his trust in the young people of India. As President, he took every opportunity in addressing the youth, interacting and inspiring them, meeting high school students across the country and exhorting them to follow their dreams and to strive towards achievements and greatness. Children and the youth responded well to Dr Kalam, perhaps recognising in him patience, understanding and genuine interest in their wellbeing. He wrote instructional poems for children and even published a book ‘Children ask Kalam’, reiterating his great desire to see them grow into responsible, intelligent individuals.

While in his 70s, he was nominated for the MTV Youth Icon of the Year award in 2003 and in 2006. This was the power of Dr Kalam’s considerable influence on the youth. “With his long silver hair unfashionably combed back and his thick Tamilian accent, he was an unlikely pop culture idol, but that was what he became,” wrote Shashi Tharoor in a tribute on the BBC website.

Born a Muslim, Dr Kalam had a deep and respectful understanding of Hindu culture, and his ability to recite classical Tamil poetry, play the veena, listen to Carnatic devotional music, remain a vegetarian all his life

and perform namaz were normal digressions to his unique personality. He embodied the true Indian spirit, of diversity, tolerance, a strong sense of duty and patriotism that resonated through his life.

There are innumerable titbits about Dr Kalam’s use of humbler modes of transport like taking buses and trains, having breakfast at his favourite tea shop, living in a one-room flat, having childhood friends who hailed from Hindu Brahmin families, and interacting with people from all backgrounds, treating the young and old with unfailing respect.

It is famously recounted that before becoming President, Dr Kalam refused free air tickets for his relatives to attend his swearing in ceremony; instead he paid for second AC train tickets for his kin. On his first visit to Kerala’s Raj Bhavan as President, his guests included a roadside cobbler and owner of a very small hotel.

Dr Kalam once refused to sit on a chair that was designated for him at convocation at BHU because the chair was larger in size than the other chairs, and on another occasion while speaking to around 400 students, Dr Kalam walked right in the middle of the crowd and asked the students to surround him. He then spoke to them without aids, and delivered an inspiring speech…as usual.

As one of India’s most distinguished scientists, Dr Kalam was awarded the coveted civilian awards – Padma Bhushan (1981) and Padma Vibhushan (1990) and the highest civilian award Bharat Ratna (1997), besides honorary doctorates from 30 universities and institutions and fellowships from many professional institutions.

Despite retirement, Dr Kalam continued his mission in reaching out to people, particularly students and his collapse midway through his presentation to the students of IIM Shillong is a tribute to his passing – doing what he did best and loved best –instructing and connecting with young people.

Dr Kalam has motivated and inspired a nation and he will be sorely missed, but his legacy is too great, too admirable, too contemporary and too visionary to ever fade.