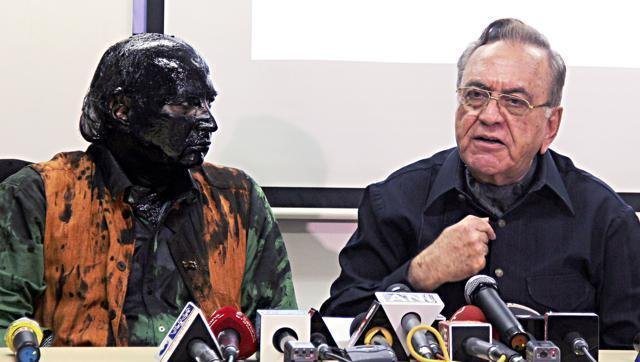 Mumbai police arrested six Shiv Sena workers late on Monday in connection with an attack on Sudheendra Kulkarni, a former BJP member who was the co-organiser for the launch event of a book by former Pakistan foreign minister Khurshid Mahmud Kasuri.

Alleged Sena supporters threw black ink on the face of Kulkarni ahead of the launch of Kasuri’s ‘Neither a Hawk nor a Dove: An Insider’s Account of Pakistan’s Foreign Policy’, a move that was condemned by chief minister Devendra Fadnavis who said he “can’t let the state turn into a banana republic”.

“Police have arrested (six) accused and a probe is on,” DCP (Zone IV) Ashok Dudhe said, as the attack triggered a wave of protests.

Among those arrested was one Gajanand Patil, who is a shakha pramukh (branch chief) of the Shiv Sena, said police. The other accused were identified as Dinesh Prasad, Ashok Waghmare, Prakash Husbe, Samadhan Jadhav and Venkatesh Nair.

A group of alleged Sena workers intercepted Kulkarni’s car just outside his home on Monday morning and painted his face black for not bowing to the party’s diktat calling for cancellation of the event over its Pakistan connection, in the latest in a string of attacks on free speech in the country.

Kulkarni, an adviser to BJP veterans Atal Bihari Vajpayee and LK Advani in the previous NDA government, termed the incident an “attack on democracy” as he addressed the media, his face and hair covered in ink.

The Sena soon sought to justify the attack and even praised it. Yuva Sena chief Aaditya Thackeray termed it a “non-violent” incident while party MP Sanjay Raut called Kulkarni a “Pakistani agent” for inviting Kasuri and said the assault was a very “mild” and “democratic” reaction.

The book launch event was organised by ORF at Nehru Centre in Worli in central Mumbai, and it took place as scheduled in the evening amid tight security.

The drama unfolded days after a warning from the Shiv Sena led to the cancellation of concerts by acclaimed Pakistani ghazal singer Ghulam Ali in Mumbai and Pune.

Almost as a reaction to the Sena’s latest diktat, the book launch hall was brimming with over 300 people, while most panelists criticised the Sena.

Meanwhile, signaling a growing rift between allies Sena and the BJP, CM Fadnavis said: “We may not agree with views of somebody, but when a foreign dignitary or a diplomat arrives on a valid visa and holds a programme, which is not illegal, it’s the duty of a state to provide protection.”

“We cannot endorse Mr Kasuri, but can’t let our state turn into banana republic. The rule of law has prevailed. I think the way things have happened has brought a bad name to our state. There could have been better ways to put forth a point of view.”